Experts Warn Of 'Escalation' Between Israel & Russia Over Syria 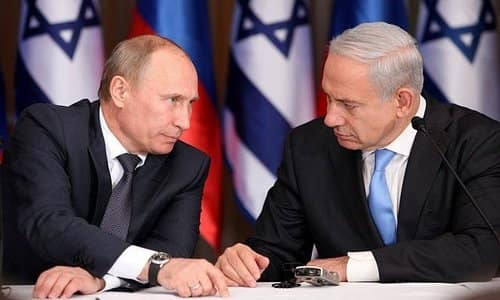 By Ariel Ben Solomon/JNS.org February 07, 2018
Share this article:
Israeli Prime Minister Benjamin Netanyahu's meeting with Russian President Vladimir Putin last week did not appear to resolve the two countries' differing objectives in Syria, and it remains unclear if the status-quo can continue.
Russian jets increased their attacks in Syria on Monday, days after Syrian rebels shot down one of its jets.
Subscribe to The JNS Daily Syndicate by email and never miss our top stories

Reported Israeli attacks against Iranian and Hezbollah targets in Syria and Lebanon must take into account the military presence of Russian forces in the country, which serve to prop up Syrian President Bashar Assad's regime.

"Russia is trying to re-establish the Assad regime's territorial control in Syria, secure its military bases there, demonstrate superiority of its weapons systems with an eye on increased military sales and develop its modalities of power projection to the Middle East," Ariel Cohen, a senior fellow at the Atlantic Council think tank, told JNS.
The result of this increased Russian role in the region is negative for Israel, said Cohen, also the director of the Center for Energy, Natural Resources and Geopolitics at the Institute for Analysis of Global Security in Washington, D.C.
Iran and Hezbollah have taken advantage of the cover of war in Syria to try to smuggle advanced weapons through Syria to Hezbollah in Lebanon.
Netanyahu said during the meeting with Putin that Iran was trying "to turn Lebanon into one big missile site -- a site for manufacturing precision missiles against the state of Israel. This is something we are not prepared to tolerate."
Cohen explained that Russian air defenses based in Syria cover most of Israeli territory, severely impeding the Israeli Air Force freedom of operation. Secondly, Russia is in a much better position to collect military intelligence on Israel; and thirdly, the Russian presence in Syria makes the Levant safe for Iran, which presents a strategic and existential threat to the Jewish state.

"All this puts Russia in a position of a strategic adjudicator vis-à-vis Jerusalem -- allowing it to decide, to a degree, the extent of Israel's freedom to maneuver in the region," he said.
"For the first time since the collapse of the Soviet Union, Moscow is almost on par with Washington in terms of dictating its political [and] military agendas in the Eastern Mediterranean region," concluded Cohen.
Anna Borshchevskaya, the Ira Weiner Fellow at the Washington Institute for Near East Policy and an expert on Russia's Middle East policy, told JNS that Russia's current objectives in Syria remain keeping Assad in power, and at the very least, maintaining a close partnership with Iran and ensuring that Moscow's interests remain protected.
Nevertheless, Russia's objectives seemingly stand in contrast to Israel's interests in the country, which is more focused on thwarting Iran and Hezbollah's buildup there. As such, this could have the potential to escalate tensions between the two countries.
"It's doubtful that Putin wants a bilateral crisis with Israel; to the contrary, good relations with Israel are important to him, but it's also unclear how long he can keep the balancing act he's maintained so far in terms of good relations with both Iran and Israel."

Borshchevskaya went on to add that "Israel's interests appear to increasingly contradict Putin's interests, and while neither side seeks a bilateral crisis, an escalation is quite possible."
Israeli attacks in Syria both help and hurt Russian interests
Yuri Teper, an Israeli Russia expert who until recently was a postdoctoral fellow at the Kennan Institute at the Hebrew University in Jerusalem, said that "allowing Israel to act in Syria hurts Russia's omnipotent image among its allies and foes, but also works to limit the extent of these attacks against Assad's regime."
However, Russia also has an interest in allowing these Israeli strikes to continue, he said. First, Israel's determination in acting in Syria when its national security is at stake means that Russia's options are limited if it wants to avoid a direct confrontation with the Jewish state.
Second, Russia's relations with Iran are not as close as some experts and the media make it appear. Both countries are competing for power in Syria, and their goals for the region differ.
"By allowing Israel to attack Hezbollah's strategic capabilities and infrastructure," added Teper, "Russia is in a way putting a check on Iran's influence and makes the Syrian regime more dependent on Russian air-force capabilities."
Originally published at JNS.org - reposted with permission.