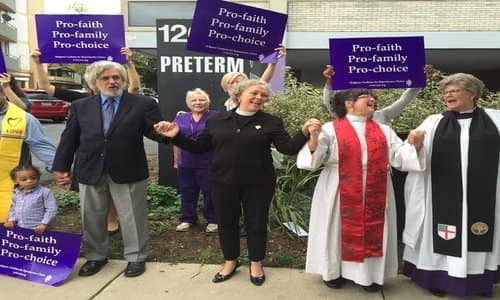 By PNW Staff February 08, 2018
Share this article:
Four members of clergy gather on a cold January day outside the doors of a Bethesda, Maryland abortion clinic. Others have gathered as well, softly singing hymns in the background. At first sight you might assume that this is yet another in a long string of protests against the clinic's owner LeRoy Carhart. If you think this is a protest, though, you are wrong.
The four members of clergy, which included a Baptist pastor, a United Church of Christ minister and a Jewish Rabbi, did not gather on January 31st to protest the actions of the clinic. They gathered instead to bless it, despite the fact that the Bethesda clinic is known as one of the few clinics in the country which will perform infamous late term abortions.
The clinic's owner, LeRoy Carhart, is famous for performing the controversial procedure, which just last week, went up for a vote in the United States Senate. The Senate voted to not ban late term abortion.
Along with the Senate's approval and the spiritual encouragement from marginal groups such as The Religious Coalition for Reproductive Choice, Carhart's new facility will continue to provide abortion services to patients as far along as thirty weeks.
The clergy members gathered to bless the clinic as they believe abortion is an expression of a "woman's moral agency," as quoted by Rev. Carlton Veazey. Veazy accompanied the other three clergy as they made their way through the clinic taking turns praying and sprinkling the clinic rooms with holy water.
He went on to say, "Keep them safe and keep them strong. And may they always know that all that they do is for Thy glory," in reference to the doctors performing these late term abortions and other staff members that work in the facility. Members of the Religious Coalition for Reproductive Choice sang hymns during the ceremony.
Although Carhart might feel encouraged momentarily by this support from a religious community, he certainly is not feeling the love from everyone. In fact Carhart's newest location in Bethesda is a result of the fact that his Germantown clinic was successfully shut down and the property bought out by the Maryland Coalition for Life last fall. This was a huge win for the Pro-life movement.
The four clergy members present at the ceremony are certainly not representative of the stand most religious leaders take on the horrific act of late term abortions.  As Russel Moore, president of the Ethics & Religious Liberty Commission of the Southern Baptist Convention, Tweeted Monday, "This is revolting." Other religious leaders are speaking out as well in condemnation of the ceremony, calling it "far outside of the mainstream of America and the Church."
Father Frank Pavone, the National Director of Priests for Life, even went as far as to say, "Most who identify themselves as Pro-Choice would be abhorred by what Carhart and other late term abortionists do."
This is certainly not the first time Carhart has come under fire. He has continually moved his practices around the country to different locations in an effort to evade his mounting reputation for botched, late term abortions.
Two of those botched procedures resulted in the death of the mothers seeking the abortion. Christin Gilbert, a special needs patient who died at Carhart's hands in 2005, as well as Jennifer Morbellie, a New York school teacher who died as a result of her late term abortion in 2013.
Late term abortions are currently outlawed in most U.S. states making the clinics in Maryland some of the few in the country that offer this particular type of abortion.
Hopes dimmed that this would become a thing of the past when the Senate failed to pass a bill that would outlaw abortions, nationwide, after 20 weeks of pregnancy.