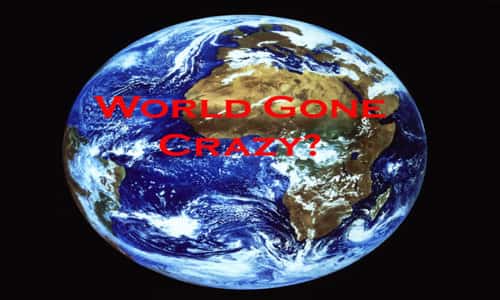 By Michael Brown/Ask Dr Brown March 13, 2018
Share this article:
Did you ever wake up and look at the latest news and find yourself wondering, "Has the whole world gone mad?"
It takes a lot to get me to that point. I see a lot of strange stuff here on the front lines of the culture wars. But every so often the accumulation of crazy stories strikes a nerve, making me ask myself, "Have we totally lost our minds?"

Banning 'Transphobic Feminist Speakers'
Back in the U.K., another headline declared, "University of Bristol students vote to ban 'transphobic feminist speakers.'"
Yes,
University of Bristol students have voted to no platform trans exclusionary radical feminists (TERFs) from speaking on campus.
TERF is an acronym for Trans-Exclusionary Radical Feminist, who claim that trans women are not women and argue that they have male privilege.
So, famous feminists like Germaine Greer and Linda Bellos would likely be banned from campus for being "trans exclusionary."
How dare they argue that a biological male who later "transitions" to female is not a real female, or, at the least, cannot relate to the lifelong experiences of a female? What a bigoted transphobic point of view! And it is other feminists who are pushing the ban.
I can only shake my head in amazement as the radical left continues to devour itself. Yet there's more still more evidence that the world has gone looney.
Decrying Campaigns Against Obesity
Also from the U.K. comes this shocking headline: "Award-winning comedian accuses Cancer Research of 'fat-shaming' for launching campaign against obesity."
According to the story,
Sofie Hagen, a Danish-born comedian who has lived in the UK since 2012 and appeared on the BBC multiple times, tweeted a picture of the poster, which spells out "OBESITY" with some missing letters, and asks readers to guess what the biggest cause of cancer is, after smoking.
But Hagen is not alone. Others style themselves "body liberation activists," proclaiming that "all bodies are good bodies" and speaking out against "fat phobia" while championing "fat liberation." (To repeat: I'm not making any of this up.)

It's one thing to shame and belittle people for being overweight. It's another thing to deny the health risks of obesity and to criticize those like Cancer Research in their efforts to save lives.
Really now, have we not lost our minds? For good reason another journalist tweeted,
Speech is violence. Moderation is extremism. Fascism is antifascism. Racism is social justice.
Welcome to 2018: where the truth is dead and words mean whatever you want them to.
Shootings at Funerals
Yet there's more, and this from a totally different front, in a headline from the city of Chicago: "Proposed task force aims to curb shootings at funerals."
This tragic story notes that, "Funeral services are supposed to be sacred. But it seems nothing will prevent gangs from opening fire on one another.
"Now, the Cook County sheriff is trying to stop violence from erupting in the middle of cemeteries." (Stop for a moment and read that line again out loud. Oh my.)
"Cook County Sheriff Tom Dart convened a meeting Thursday of political, religious and funeral industry leaders to talk about the growing violence surrounding the funerals and processions of Chicago gang members."
A World Unhinged is Nothing New
No doubt about it. The world around has gone totally crazy.
But before you lose your mind too, allow me to give you a helpful perspective. Since the day Adam and Eve sinned in the garden, the world has been going crazy, to the point that their first son, Cain, murdered their second son, Abel. That's crazy.
And it's not just America that's unhinged, but every nation on the planet, to one degree or another. In fact, one of our good friends, a missionary serving the poorest of the poor in Nigeria, sends me regular updates of the madness that surrounds her there.
She closes her email with two words, which I will repeat here, pointing to the sole hope of our planet: "Only Jesus."
To say it again: Only Jesus.
Originally published at AskDrBrown.org - reposted with permission.