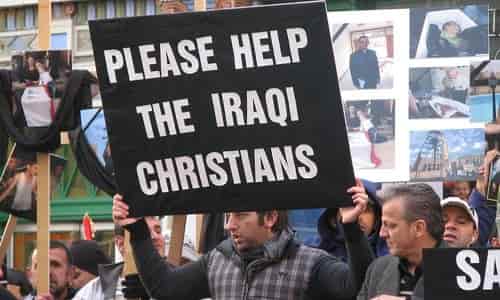 By Giulio Meotti/Gatestone Institute April 06, 2018
Share this article:
Persecution of Christians is worse today "than at any time in history", a recent report by the organization Aid to the Church in Need revealed. Iraq happens to be "ground zero" for the "elimination" of Christians from the pages of history.
Iraqi Christian clergymen recently wore a black sign as a symbol of national mourning for the last victims of the anti-Christian violence: a young worker and a whole family of three. "This means that there is no place for Christians," said Father Biyos Qasha of the Church of Maryos in Baghdad. "We are seen as a lamb to be killed at any time".

A few days earlier, Shiite militiamen discovered a mass grave with the bodies of 40 Christians near Mosul, the former stronghold of the Islamic State and the capital of Iraqi Christianity. The bodies, including those of women and children, seemed to belong to Christians kidnapped and killed by ISIS.
Many had crosses with them in the mass grave. Not a single article in the Western mainstream media wrote about this ethnic cleansing.
French Chief Rabbi Haim Korsia made an urgent plea to Europe and the West to defend non-Muslims in the Middle East, whom he likened to Holocaust victims. "As our parents wore the yellow star, Christians are made to wear the scarlet letter of nun" Korsia said.
The Hebrew letter "nun" is the same sound as the beginning of Nazareen, an Arabic term signifying people from Nazareth, or Christians, and used by the Islamic State to mark the Christian houses in Mosul.
Now a new report by the Iraqi Human Rights Society also just revealed that Iraqi minorities, such as Christians, Yazidis and Shabaks, are now victims of a "slow genocide", which is shattering those ancient communities to the point of their disappearance. The numbers are significant.
According to the report, 81% of Iraq's Christians have disappeared from Iraq. The remaining number of Sabeans, an ancient community devoted to St. John the Baptist, is even smaller: 94% have disappeared from Iraq. Even 18% of Yazidis have left the country or been killed. Another human rights organization, Hammurabi, said that Baghdad had 600,000 Christians in the recent past; today there are only 150,000.

These numbers may be the reason Charles de Meyer, president of SOS Chrétiens d'Orient, has just spoken of the "extinction of Christians". Father Salar Kajo of the Churches' Nineveh Reconstruction Committee just spoke of the real possibility that "Christianity will disappear from Iraq".
Many ancient Christian churches and sites have been destroyed by Islamic extremists, such as Saint George Church in Mosul; the Virgin Mary Chaldean Church, attacked by car bomb, and the burned Armenian Church in Mosul. Hundreds of Christian homes have been razed in Mosul, where jihadists also toppled bell towers and crosses. The Iraqi clergy recently warned, "The churches are in danger".
Tragically, Christians living in lands formerly under the control of the "Caliphate" have been betrayed by many actors in the West. Governments ignored their tragic fate. Bishops were often too aloof to denounce their persecution.
The media acted as if they considered these Christians to be agents of colonialism who deserved to be purged from the Middle East. And the so-called "human rights" organizations abandoned them.
European public opinion, supposedly always ready to rally against the discrimination of minorities, did not say a word about what Ayaan Hirsi Ali called "a war against Christians".
Some communities, such as the small Christian enclaves of Mosul, are now lost forever. Syriac Orthodox Patriarch Ignatius Aphrem II said there is a "real danger" Christianity could just become a "museum" in the Middle East. He noted that Iraq has lost 80-90% of its Christian population.

A few Christian villages have begun a slow and painful process of reconstruction with funds donated mainly by international relief organizations such as the US Knights of Columbus and Aid to the Church in Need. US Vice President Mike Pence recently promised to help these Christians.
Action now must follow words. Christians who escaped and survived ISIS cannot depend today only on aid from churches and private groups.
Among European governments, only Hungary took a principled position and openly committed itself to save Iraqi Christianity from genocide. Recently, the Hungarian government opened a school for displaced Christians in Erbil; Hungary's Minister of Human Resources, Zoltan Balog, attended the event.
Imagine if all the other European countries, such as France and Germany, had done the same. The suffering of Christians in Iraq would today be much less and their numbers much higher.
The West was not willing to give sanctuary to these Christians when ISIS murdered 1,131 of them and destroyed or damaged 125 of their churches. We must now stand by their side before it is too late.
After the mass displacements and the mass graves, we must help Christians rebuild in the lands where their people were martyred. Otherwise, even the smallest hope of hearing the sound of Christian church bells in the ancient lands of the Bible will be forever lost.
Originally published at Gatestone Institute - reposted with permission.