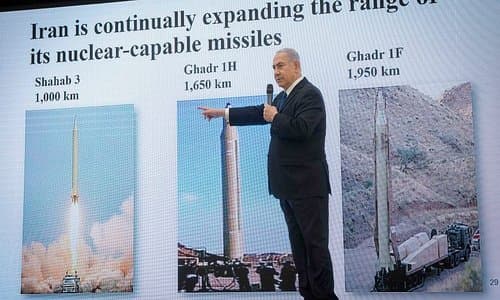 By Sean Savage/JNS.org May 01, 2018
Share this article:
Israeli Prime Minister Benjamin Netanyahu claims that Iran has "lied big time" about the nature of its nuclear program.
In a speech delivered in English and broadcast during prime time in Israel on Monday night from the country's Defense Ministry, he said that Israel had covertly obtained some 55,000 pages of documents and 55,000 files on CD showing that "Iran is brazenly lying when it says it never had a nuclear-weapons program. The files prove that."

The cache is full of "incriminating documents, incriminating charts, incriminating presentations, incriminating blueprints, incriminating photos, incriminating videos and more," he said.
According to Netanyahu, found within the documents in proof of the existence of Project Amad, a program that Iran had set up to design, build and test nuclear weapons but was scrapped in 2003. However, Netanyahu claimed that Iran continued its program, splitting it into covert and overt tracks to avoid scrutiny.
"This is exactly what Iran continued to do," said Netanyahu. "Iran planned at the highest levels to continue work related to nuclear weapons under different guises and using the same personnel."
The Israeli leader stated that despite Iran denying its past nuclear work to the International Atomic Energy Agency--the United Nation's nuclear watchdog--when it signed the 2015 nuclear deal, the files showed that Tehran "authorized, initiated and funded Project Amad."
Netanyahu said Iran has "lied" about never having a nuclear program, that it continued to "preserve and expand its nuclear know how for future use," and that the nuclear deal is based on "Iranian lies and deception."
"This is Israeli intelligence at its most extraordinary, changing history through the patient access of key information. I expect this trove of documents will lead to a fundamental change in dealings with Iran's nuclear buildup," Daniel Pipes, president of the Middle East Forum, told JNS.

Nader Uskowi, an Iranian-born visiting fellow at the Washington Institute for Near East Policy and former senior policy advisor for the U.S. Central Command (CENTCOM), similarly praised the "intelligence coup" by Israel, explaining to JNS that the evidence presented by Netanyahu also calls into question the validity of the Iranian nuclear agreement.
"In 2015, prior to the JCPOA going into effect, Iran had to certify to IAEA that it never had a nuclear weaponization program--the so-called military dimension of their nuclear program. JCPOA went into effect based on false certification by IAEA that there were never any weaponization program in Iran," he said. "Now we know that IAEA's certification was based on false information, and this development questions the validity of the agreement."
Reactions from experts on social media were mixed to Netanyahu's speech, with some seeing this as clear evidence that Iran negotiated the nuclear deal in bad faith, while others did not see the Israeli leader providing proof that Iran is violating the current agreement.
"Iran regime conducted nuclear-weaponization activities, lied to the IAEA and to the world & hid 100,000+ documents, videos, photos with the instructions to restart a nuke weapons program at a time of its choosing," tweeted Mark Dubowitz, CEO of the Foundation for Defense of Democracies.
However, Iranian-born Israeli Middle East commentator Meir Javedanfar tweeted that Netanyahu did not present anything new. "We all know Iran lied in the past about military nuke program, but Netanyahu did not show that Iran is continuing to build weapons after the #Irandeal," he put forth. "All he proved was Iran lied in past."

New information could sway the Europeans
In his speech, Netanyahu also noted that Israel shared the information on Iran with the United States, and that he believes that U.S. President Trump will "do the right thing" on the May 12 deadline regarding whether or not he will pull out of the nuclear accord.
According to Bloomberg News, the United States has verified the material as "authentic."
The speech by Netanyahu comes one day after the new U.S. Secretary of State Mike Pompeo visited Jerusalem.
Pompeo, who has long been a critic of the nuclear deal, said the president has insisted that the deal be fixed. "He's directed the administration to try and fix it, and if we can't fix it, he's going to withdraw from the deal. It's pretty straightforward," he said.
Former U.S. Ambassador to Israel Dan Shapiro tweeted that he believes Netanyahu's address was fully coordinated with the Trump administration. "Obviously, Netanyahu's announcement tonight on the Iranian nuclear program is fully coordinated with the U.S. side," according to Shapiro. "The call with Trump yesterday and Pompeo's visit would have locked it in."
As such, Uskowi believes that Israel's evidence may strengthen the Trump's administration's goal of fixing the deal or implementing a more comprehensive agreement.
"The skeptical Europeans, after examining the documents and their validity, would more likely side with the U.S. about the need for a much stronger nuclear deal with Iran--a significantly revised JCPOA--and the Iranians might not have much option now but to agree to renegotiate the agreement," he said. "Otherwise, they would put themselves into a corner, facing a united E.U.-U.S. front, and the prospects of snap-back sanctions and tougher measures."
Uskowi added: "President Trump most probably will not certify the agreement as is. But that does not mean that the U.S. could not join the Europeans to come up with a much more comprehensive agreement--one that would include Iran's ballistic-missile program as part of its nuclear program; tighten inspection regime, including all sites, military or civilian, suspected of being part of the country's weaponization program; and the elimination of sunset clause."
Originally published at JNS.org - reposted with permission.