Here's Why the Media Got the Gaza Violence Wrong 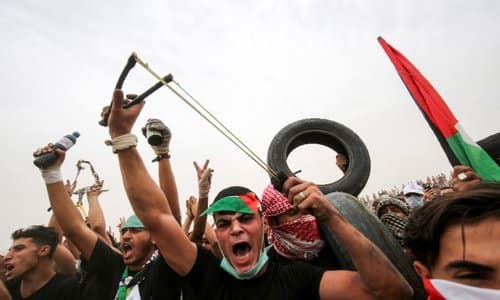 By Sean Durns/Algemeiner.com June 02, 2018
Share this article:
Western journalists covering the Arab-Israeli conflict are in need of an intervention. Many of them have spent the last several weeks regurgitating claims by Hamas and confusing terrorists with "protesters." In so doing, they have helped the US-designated terror group in its attempt to delegitimize and destroy the Jewish state. And they should have known better.
Since late March 2018, Hamas has been sending terrorists -- interspersed with unarmed civilians serving as human shields -- to try to breach the Israel-Gaza border.

Hamas has dubbed this long operation -- whose participants have included members of other US-designated terror groups, like Palestinian Islamic Jihad (PIJ) -- the "Great Return March." These terror groups hope to sacrifice their own people and place Israel in a no-win situation.
If terror operatives are able to cross the border, violating Israel's sovereignty and endangering its citizens, it's a win. If Israel defends itself and Gazans die in the process it will be condemned by self-styled human rights arbitrators, fueled by a gullible media.
As Matti Friedman, a former IDF soldier and AP journalist, recently observed, Hamas knew that, "The press could be trusted to present dead human beings not as victims of the terrorist group that controls their lives, or of a tragic confluence of events, but of an unwarranted Israeli slaughter."
And Hamas has pulled out all the stops to put on a grotesque show, paying and busing in demonstrators, and bringing children and the disabled to the border in the hopes that they catch an errant bullet. Indeed, the group has even burned tires and used mirrors to obscure the vision of IDF snipers, who are seeking to specifically target the terror leaders hiding among civilians.
During the round of border violence that began on May 14, 2018, as many as 62 Gazans were reportedly killed, prompting front-page headlines by The New York Times, The Washington Post, and others -- all repeating claims provided by the Hamas-run Health Ministry -- about "protesters killed" and "indiscriminate" and "excessive" use of force.
Some outlets, such as USA Today, uncritically quoted declarations by anti-Israel UN official Michael Link that the "demonstrators" were "largely unarmed." Many pundits also contrasted the bloodshed in Gaza with ceremonies on the same day for the dedication of the newly-moved US embassy in Jerusalem -- even claiming that the embassy move was responsible for the violence.

Two days later, Salah Bardawil, a senior Hamas official, told Palestinian news outlet Baladna TV that "50 of the martyrs were from Hamas, and the other 12 were regular people." He added, "I am giving you an official figure."
In short, the overwhelming majority of the "protesters" killed were, in fact, terrorists.
And the media had every reason to expect that this would be the case. On April 26, 2018, the Meir Amit Intelligence and Terrorism Information Center published a report showing that of the Palestinians killed up to that point in the "Great Return March," 32 -- or 80 percent -- were linked to terrorist groups.
Indeed, according to a translation provided by the Middle East Media Research Institute (MEMRI), Hamas official Mahmoud al-Zahar admitted to Al-Jazeera on May 13, 2018 that the group was "deceiving the public" when it claimed that the March was one of "peaceful" resistance. This was, he proudly said, "a clear terminological deception."
Nonetheless, many journalists, including those at The Washington Post, The New York Times, USA Today, NPR, and others, continued to refer to the dead as "protesters" and omitted or minimized evidence that the "march" was a Hamas-run propaganda ploy. In short: they ignored what Hamas is and always has been.
Hamas has always targeted Israeli civilians and employed Palestinian human shields -- a double war crime. The group has used schools to hide its weaponry, equipment, and fighters, and as recently as the 2014 conflict with Israel, Hamas used ambulances as "transport vehicles" and hospitals as "command centers."
Since its creation as a Muslim Brotherhood spinoff in 1987, Hamas has made its objectives clear. The group's founding charter calls for the destruction of Israel and the genocide of Jews -- even approvingly quoting Adolf Hitler's Mein Kampf.
Since Israel's unilateral withdrawal from the Gaza Strip in 2005, Hamas has launched no fewer than three wars against the Jewish state -- in 2008, 2012, and 2014 -- in addition to the frequent rocket attacks that began shortly after the group seized power in 2007.

Yet, this history and Hamas' genocidal objectives have largely gone unmentioned by many media outlets covering the latest round of violent demonstrations at the border. Instead, many in the media have uncritically echoed casualty claims made by the "Palestinian Health Ministry" -- a Hamas-controlled entity that shares the terror group's objective of delegitimizing and destroying Israel.
It's hard to imagine the press echoing the claims of other Islamist terrorist groups, such as ISIS or Al Qaeda. Yet with near ubiquity they've done so with Hamas while ignoring video and photographic evidence showing Palestinians planting explosives, carrying firearms, knives, and Molotov cocktails, and even launching kite bombs embroidered with swastikas. As one 19-year-old Gazan proudly told an NPR reporter, "We want to burn" the "Jews. ... This is actually what we want them to know."
But as usual, when it comes to Israel, there is a double standard. The terrorist perpetrators are treated as privileged victims instead of human beings capable of independent agency. To many in the press, the Israeli-Palestinian conflict is one of dueling narratives, as opposed to cold hard facts -- as unpleasant as they might be. And the facts remain: Hamas is a genocidal terrorist group. Peaceful protests don't involve violence. And no matter how many times headlines blare it, terrorists are not protesters.
Originally published at Algemeiner.com - reposted with permission.