The UN Is An Enemy In Sheep's Clothing 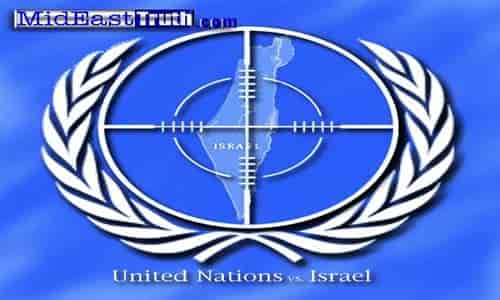 By Pini Dunner/Algemeiner.com April 04, 2016
Share this article:
Last Friday, the UN Commission on the Status of Women voted on a resolution blaming "Israeli occupation" for the lack of advancement of Palestinian women in their own society. Stunningly, Israel was the only country singled out for any criticism by the UN Commission on Women, after two full weeks of meetings.

Yes, you read correctly - the only country out of the 193 recognized countries in the world. The resolution passed by 27 to 2, with 13 abstentions. No mention was made throughout the proceedings of the dozens of countries where the concept of advancement for women is simply non-existent, countries in which women are consistently mistreated and abused - such as Saudi Arabia, Pakistan, North Korea and Iran, to name just a few.
You may have already read about this story, but I'm pretty certain that you did not read through the more than 8,500 words of the resolution itself. It is truly a remarkable document. Remarkable, that is, in its twistedness and absurdity.
Take this gem, for example: "Gender-based violence continues to be a key protection concern for women in the State of Palestine, and the situation is particularly acute in the Gaza Strip. A 2011 survey showed that 51 per cent of women in Gaza had been victims of gender-based violence."
Or this one: "Case studies indicate that economic hardship, following the 2014 conflict in Gaza, has driven families to marry off their daughters early in order to improve the economic situation of the family."
In other words, the UN is blaming Israel for Palestinians who viciously beat up their wives and who marry off their daughters to improve their finances. The resolution also meanders off in directions that have nothing to do with Palestinian women's issues.
For example, it mentions the stalled negotiations for a two-state solution, and the poor state of healthcare provided by the Palestinian Authority, all of which is Israel's fault, obviously.
The UN's bias against Israel has become an unrelenting vendetta. Like a mob of vindictive school bullies ganging up on the one kid that they all agree to hate, every vile country in the world has found that the UN is a perfect outlet for their unbridled antisemitism, and joined forces with each other to endlessly target the world's only Jewish country.
Not a week goes by without the UN taking some action against Israel, or making some negative pronouncement about Israel - all ratified by majority votes in accordance with the strictest democratic guidelines, guidelines ironically not available in most of the countries that make up those anti-Israel majorities.
Last Friday's outrage was followed closely by this week's "let's-all-gang-up-against-Israel" moment, when the UN Human Rights Council announced that it would be producing a database of all the Jewish businesses operating out of Judea and Samaria, so that their products could be blacklisted.
This UN crusade to undermine Israel at every turn under the guise of being a professionally run objective international body that strictly observes democratic protocols, reminds me of something in this week's Torah portion.
After informing us that only animals which have split hooves and chew the cud are kosher, the Torah lists four animals that possess just one of these characteristics, which means they are not kosher, as there is no such thing as half-kosher. The best known of these four animals is the pig, which is not kosher "because it has a cloven hoof that is completely split, but does not chew the cud."

It has always puzzled me why pig meat, of all the possible types of non-kosher meat, is so reviled in Jewish tradition. I think the answer lies with an interesting Midrash, which asks why the Roman Empire was often compared to a pig.
The Midrash answers with a fascinating observation about pigs. Unlike every other mammal of its size, the pig does not lie on top of its legs when it sleeps, but rather stretches its legs outwards so that everyone can see its feet.
It seems to want to declare, "See! I am a kosher animal! I have split hooves!" The Roman Empire is no different, says the Midrash, in that it pretends to be the bastion of justice and progress, but in reality this is a false identity, perpetuated to mask Rome's violent nature and thorough dishonesty.
The United Nations is no different from ancient Rome. It is not a neutral organization. Its so-called democratic procedures mean absolutely nothing whatsoever when they are constantly used and abused by all kinds of murderous regimes and bigoted nations to perpetuate the lie that any vote condemning Israel was the result of a fair and transparent democratic process. Such claims are comparable to the pig thrusting out its split hooves to prove that it is kosher.
The revulsion felt for pigs in Jewish tradition makes perfect sense. Enemies we can identify - because they look like villains and act like villains - are an obvious threat and will be tackled for that reason. But enemies who are wolves in sheep's clothing, who hide behind protestations of "human rights concerns" and the "advancement of women," are possibly of greater danger to us than a knife-wielding murderer.
That's because their pretense of being even-handed and fair, and their hollow justifications for Jew-hating and Israel-bashing, undoubtedly results in an increased number of knife-wielding murderers who feel entitled to wreak their bloodthirsty havoc at will.
Yes, the UN, rather than promoting greater international harmony and peace, literally has blood on its hands. The revulsion we have for the UN is not because it is not kosher; it is because of its insistence that it is as kosher as can be. Nothing could be more disgusting than that.
Orignially published at Algemeiner.com  Reposted with permission