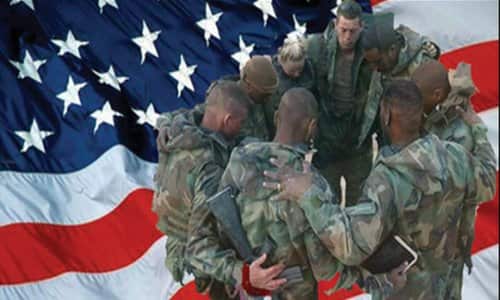 By PNW Staff August 28, 2018
Share this article:
United States Air Force Brigadier General John Teichert is the latest target for The Military Religious Freedom Foundation, an atheist group dedicated to launching legal attacks against Christians in the military.
The anti-religion group founded by Mikey Weinstein has sent a legal demand letter to Secretary of Defense General Mattis asking that General John Teichert, who currently commands the 412 Test Wing at Edwards Air Force Base in California, be stripped of his command and arrested.

In a press release put out by the anti-Christian group on August 13th, they exclaim, with ‘caps lock’ pressed all the way down, that "GENERAL TEICHERT SHOULD BE DOING TIME BEHIND PRISON BARS, NOT COMMANDING A WING WEARING GENERAL's STARS" because his Christian identity somehow denigrates LGBT individuals.
The group's legal counsel, Mr. Donald Rehkopf, relies largely upon statements found on Gen. Teichert's personal website and vague complaints from anonymous airmen who, Rehkopf conveniently claims, fear retaliation too much to reveal themselves.
So what are these public statements that have so sullied the office of Brig. Gen. in the US Air Force and provoked the unmitigated ire of anti-religious zealots who refer to Gen. Teichert as "the American Christian version of the Taliban"?
Here are a few of the offending statements that The Religious Freedom Foundation cites in their press release and demand letter, "I would ask for your prayers for wisdom in my life of leadership and discernment and understanding and knowledge for influence over the nation's senior leaders that I get to rub shoulders with. My desire is to maximize my impact on people in our country for the Lord."
The statements, which The Religious Freedom Foundation found so scandalous, can be found on Prayer at Lunchtime for the United States (PLUS), the personal website Mr. John Teichert maintains to share his Christian faith.

The group also finds fault with Teichert when he writes, "I came to Lancaster Baptist Church in December 2002 for the first time. My wife and I were looking for a church, and we found a good ad for Lancaster Baptist in the Yellow Pages, so we visited.
We were immediately made to feel welcome and at home, and we enjoyed what I now know is a balance of grace and truth." Clearly, Mr. Teichert is sharing his personal life-experience with his faith, but it is not clear how this may carry over to his military command.
Strangely, Weinstein's demand letter and press release accuse the General of "slamming American society at large," in response to statements on his PLUS website such as "I'm concerned about our country's drift away from the foundation on which we were built. I personally believe that those who call themselves Christians are largely to blame because we have failed to stand up for the cause of Christ in our country.
We have failed to pray. We have failed to put into practice the principles in 2 Chronicles 7:14. On our watch, we have allowed our country to slip away from its founding Christian principles while it has become increasingly intolerant of Christianity."
After seeing the radical atheist group's complaint, can anyone deny that the general is correct when he claims that the country "has become increasingly intolerant of Christianity"? Weinstein's ironically named Religious Freedom Foundation accuses Brig. Gen. Teichert of using his position of military authority to promote PLUS simply because his photo on the website shows him in uniform and the posts sharing his personal faith fail to include a disclaimer reminding visitors to the site that the views expressed are not those of the United States military.

The Pentagon has so far ignored the demand letter, as one would hope they would with baseless accusations that amount to little more than libel masquerading as a legal complaint. No specific instances of religious discrimination against those airmen are presented, leaving Weinstein's letter with even less legal standing than if a single documented comment had been made or action taken that used the Brig Gen. Teichert's position of authority to discriminate against anyone under his command.
The demand letter and press release might be summarily dismissed by the Pentagon and amount to little more than sound and fury meant to defame an honorable serviceman, but it does indicate a larger effort by radical, anti-Christian groups to purge the military command of Christian voices. The Military Religious Freedom Foundation normally confines their complaints to nativity scenes found on bases or Bibles placed near missing man memorials, but its foray into character assassination is telling.
To give readers an idea of the man Brig. Gen. Teichert is and the type of statement that drew Weinstein's condemnation, consider this personal statement taken from PLUS, his personal website, "I grew up with a deep love for my country that my parents had instilled deep within me, and that gave me a natural desire to serve my country. Also from a young age, I wanted to fly, and joining the Air Force was a natural step to becoming a fighter pilot. Ultimately, my desire has always been to maximize my impact on our nation in a life of service."
Do these words from the general sound like the voice of a religious bigot who seeks to impose a radical Christian theocracy and persecute service members who don't share his beliefs? Or could it be that Weinstein and his cadre of lawyers are seeking to vilify honorable military officers who happen to hold sincere Christian beliefs in their private lives?