Prophetic Wine For The Future Temple 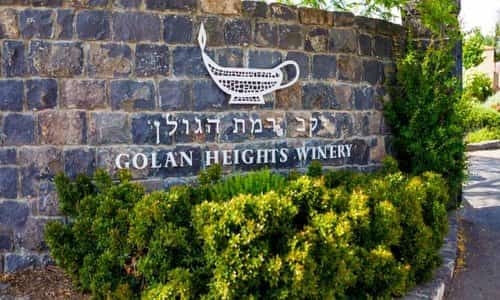 By Adam Eliyahu Berkowitz/Breaking Israel News September 02, 2018
Share this article:
Wine is mentioned by the prophets as a sign of the Jews' return to the Land of Israel. One Israeli vintner is experiencing this prophecy fulfilled.
Eyal Tsair, a vintner at the Golan Heights Winery, combines three of his greatest passions in his job: wine, Torah, and the Land of Israel. For Tsair, wine has certainly played an important, if not prophetic role in his aliyah (immigration to Israel). Arriving in 1991 from Germany, he began working at the Golan Heights Winery in 1993 upon completion of his service in the Israel Defense Force.
For Tsair, it is clear that making wine is far more than creating a beverage. He believes that, contained in his bottles, is the most powerful proof that the Jewish people have returned to their Biblical homeland.

"Several prophets speak specifically about grape vines as a part of the Jews' return to the Land of Israel," Tsair said to Breaking Israel News. "What is so special about grapes? Why didn't the prophets speak about wheat or herds of cattle? When the prophets describe a return to Israel that included grape vines, they were describing a specific type of return; one that will be permanent.
"Contained in a bottle of wine is the proof that the Jews have returned to Israel in a meaningful and permanent manner," Tsair continued. "It takes many years of work until you enjoy the wine. After you plant a grape vine, you have to wait four years for orla." Orla (literally 'uncircumcised') refers to the prohibition of eating the fruit from a tree planted in Israel for the first three years. When the Temple exists, the fruit of the fourth year may be eaten in Jerusalem.
When you enter the land and plant any tree for food, you shall regard its fruit as forbidden. Three years it shall be forbidden for you, not to be eaten. In the fourth year all its fruit shall be set aside for jubilation before Hashem. Leviticus 19:23
"Even after we harvest the grapes, aged red wine sits in the cask for two years," Tsair explained. "Planting grape vines is a long-term investment. It is only for those who are truly connected to the land and who plan on being here for many years to come."

For Golan Heights Winery, this process was been even longer and more tenuous. Planting their first vines in 1976 was a leap of faith. Israel's northern Golan Heights were conquered in the 1967 Six-Day War but the region was not annexed by the Israeli government until 1981.
The yet-to-be-harvested vineyards were nearly lost when Syria overran the region in the 1973 Yom Kippur War. The first Golan wine was produced in 1983, immediately receiving international accolades.
The winery has invested heavily in the Golan, based on the belief that the prophetic return of the Jews to the region is permanent. They currently harvest more than 1,200 acres of vineyards. Their yield of 5.5 million bottles of wine annually is relatively low since they emphasize quality over quantity.
Tsair contrasted this long-term investment to the manner in which others have related to the Land.
"It is true that the Arabs were here. But, they passed through with their flocks, consuming everything in their path and then moved on," Tsair said. "Goats rip out the roots and leave the Land barren. That is not how the true owner of the Land acts. There is no personal investment."
Tsair compared this to King Solomon's judgement between two women claiming one baby as their own. Solomon offered to cut the baby in half, giving one half to each claimant. The true mother refused as her love for her child made it unbearable to bring any harm to her baby.
"Everywhere you go in Israel, you can see the love the Jewish people have for the Land," Tsair said. "The Arabs claim it is theirs. But, when there is a dispute like there is in the south of Israel right now, they don't hesitate to burn everything."

Tsair emphasized that wine production was always thriving whenever there was a Jewish presence in Israel.
"Grapes are one of the seven species that receive a special blessing in the Bible," he noted.
A land of wheat and barley, of vines, figs, and pomegranates, a land of olive trees and honey. Deuteronomy 8:8
"This special blessing was evident in Roman times when wine from Israel was highly prized as the best in the world," Tsair explained. "Wine has always been part of the Jewish presence in Israel, especially here in the Golan."
Tsair presented to Breaking Israel News a map dotted with ancient wine-presses that archaeologists discovered in the Golan.
"Unfortunately, we no longer have the original species of grape vines," he said. "For 1,300 years of Muslim dominance in the region, wine production was prohibited."
Tsair has a passion for wine and even has a small winery at his home in Migdal on the shores of the Galilee. He is still waiting for the ultimate expression of his wine-making skills.
"I am here for the entire journey," Tsair said. "It is my dream that one day, I can bring my best wine to the Temple."
Originally published at Breaking Israel News - reposted with permission.