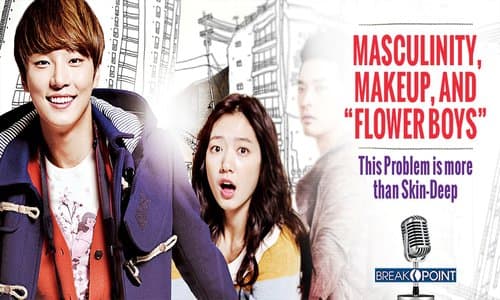 By John Stonestreet/Breakpoint.org September 13, 2018
Share this article:
No amount of makeup will cover the fact that more and more men are walking away from vitally important aspects of masculinity.
A recent BBC article introduced readers to South Korea's latest high-profile export. Not a Hyundai, a Kia, or even the musical phenomenon known as "K-Pop."

I'm referring to men's makeup. As the BBC put it, "in South Korea, ideas about how to look good as a man are changing attitudes and influencing the world."
The BBC takes readers inside a "high-end salon" in Seoul's trend-setting and prestigious Gangnam district. There, a make-up artist "expertly applies foundation, eyeliner and lipstick on a man," choosing "from an array of products and brands that will be familiar to most women."
The goal is to look like their favorite K-Pop stars and television celebrities.
Let me be very clear. This story is not talking about gay men. Rather, it's referring to an aesthetic associated with what are called "flower boys" in Korea: "delicate, slightly feminine-looking boys." They are a staple in Korean drama, where they play a role that's analogous to the gay best friend that we see in romantic comedies in America.
While unlike the gay best friend they may have feelings for the female lead, they almost never get the girl, in large part because they aren't taken seriously as men. And that prompts an obvious question: Why would a non-gay male want to emulate these "flower boys" in real life?

The question isn't limited to just South Korea. As Joanna Elfving-Hwang from the University of Western Australia told the BBC, "I think Korea is a trailblazer in men's beauty culture, definitely in Asia at the moment, if not the world." This toying with masculinity, she says, "opens up possibilities for men on the street and eventually makes it more acceptable."
Now, whether this aesthetic remains confined to Korea or ends up bringing back a trend we haven't seen since the demise of the last 18th century French king, the struggle to define what it means to be a man in the 21st century developed world remains unsettled.
We see evidence of this crisis everywhere. One example is what Nicholas Eberstadt of the American Enterprise Institute called "the flight from work." As he writes, "America is now home to an ever-growing army of jobless men no longer even looking for work--over 7 million between ages 25 and 55, the traditional prime of working life."
To put that in historical perspective, "In 2015, the work rate for American males aged 25-54 was slightly lower than it had been in 1940, at the tail end of the Great Depression. During the Great Depression, jobless men jumped on trains and lived in tents trying to find work. Today, most won't even get off their couch.

The "flight from work" shows how our cultural idea of masculinity has been severed from the role of men as provider. In a related trend, American men are also postponing fatherhood. "The average age of a newborns' father went from 27.4 years in 1972 to 30.9 in 2015." This reveals that young men aren't giving much thought to the idea of being a provider but instead often living for themselves.
Then there's the role of protector, as Eric Metaxas recently mentioned on BreakPoint. The decline of this ideal is reflected in the history of the expression "flower boys." The phrase originally referred to a group of men who came together to "learn the military arts and cultivate virtue" in seventh-century Korea.
One of those "virtues" was "bravery in battle." While they dressed well and even used cosmetics, protection of their society was their primary purpose.
Regaining a proper understanding of what it means to be male in our culture is one of the most urgent cultural tasks we face. No matter how much we insist otherwise, biology, physiology, psychology, even the Bible itself, tell us that men and women are different, both created in their complimentary uniqueness to bring life to the world.
Originally published at Breakpoint.org - reposted with permission.