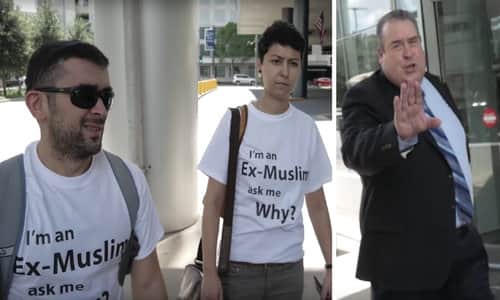 By Meira Svirsky/Clarion Project September 17, 2018
Share this article:
Starbucks is back in the news. Only, this time, you won't hear about it from the mainstream media.
Remember when two black men sitting in a Starbucks in Philly were asked to leave by the manager? The men were not ordering anything, yet refused the request to leave.  Apparently feeling their behavior was suspicious, the manager eventually called the police, who ended up taking the men away in handcuffs.

A furor ensued across the country, calling the incident discriminatory. Non-stop media coverage began as Starbucks fired the manager, issued multiple apologies and closed all its stores for a day of diversity training for all employees.
Social justice warriors were consulted (except for the Jewish ones that were initially consulted but later kicked off the advisory group since some of the other members of the open-minded, diverse people in the group couldn't take that much diversity).
Fast forward less than six months. One of the American Muslim Brotherhood-linked fronts groups, the Islamic Society of North America (ISNA), held an enormous conference in Houston last weekend featuring a line-up of some of the most extreme Islamist clerics and anti-Semitic personalities in the U.S. today.
From Zahra Billoo -- who tweeted her support of terror financier Sami Al-Arian, Hezbollah and Hamas and her disgust of American soldiers on Memorial Day -- to sharia-apologist and feminist impersonator Linda Sarsour to Zayid Shakir - one of the founders of the first Muslim colleges in the U.S., who wants a world run by sharia and has preached violent jihad to get there.
Also making their presence known in the vicinity of the conference was a group of activists from an organization called Ex-Muslims of North America, who reported that their interactions with conference goers were mostly friendly.

The activists, donning t-shirts that said, "I'm an Ex-Muslim. Ask me Why?" were sipping their coffee across the street at the Hilton Starbucks (where conference participants were also staying) when they were summarily thrown off the premises by security for being "protesters."
It appears that even though they weren't harassing customers or actively agitating inside the Starbucks, their t-shirts alone were enough of a protest to get them kicked out.
No mention of this in the press. No uproar by social justice warriors.
In these situations where social justice warriors overreact, it is always a good litmus test to imagine the same situation but with different players. The reason why the incident in Philly created such a furor was because the guys sitting in the Starbucks were black and (correct or not) the PC crowd jumped to the conclusion that that was why the manager didn't feel safe.

In Houston, one can only imagine if the conference was comprised of Israel supporters. A couple of guys in t-shirts reading "I support the Palestinians" are sipping coffee in a Starbucks across the street from the conference. They are a group of peaceful protesters. Are their t-shirts enough to get themselves thrown out of the Starbucks and threatened with arrest?
So, let's just get the situation clear about what just happened in Houston: While conference participants enjoyed the anti-American, anti-democracy extremist rhetoric being fed to them by pre-booked speakers (thank you, First Amendment), the guys who opposed them can't drink a cup of coffee in the Starbucks across the street because of their political/religious opinions.
America, 2018.
Originally published at Clarion Project - reposted with permission.