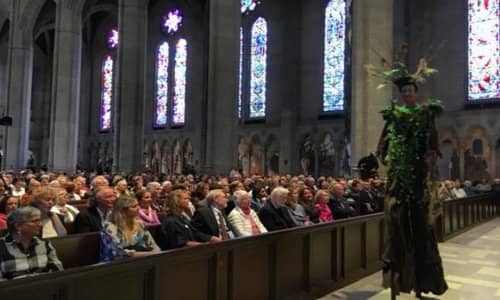 By PNW Staff September 25, 2018
Share this article:
Grace Cathedral in San Francisco has been no stranger to controversy in the past year with its Beyoncé Mass, an LGBT rights forum headlined by Holcombe Waller and men cross-dressing as nuns.
This month's interfaith service focused on climate change and features men and women dressed in elaborate tree-people costumes, complete with stilts and long branches for arms accompanied by representatives of the Muslim, Hindu and Buddhist religions, among others.

More like a scene from a Tolkien novel with tree ents in attendance, the ever more liberal nature of this Episcopalian worship service leaves open the question as to what exactly is being worshiped.
Between advocating for queer rights, transgender ideology, climate change alarmism, pop culture mania and garish entertainment shows, it is easy to forget that there is supposed to be a Christian church in the middle of it all.
Video footage of the ceremony shows a parade of religious figures hailing from a range of 'faiths', and several individuals who have donned tree-creature costumes to represent Mother Earth. As the camera pans the pews, one cannot help but notice that the congregation has grown more sparce and, despite the progressively liberal nature of the service, tends to reflect an older demographic. Yet this should be no surprise considering the wide decline of the Episcopal Church as well as the Church of England across the pond.
Estimates put the number of members of the Episcopal Church who regularly attended Sunday services at around 857 thousand in the year 2000. Ten years later, that number had fallen to 658 thousand, a decline of 23%. In 2017, the average Sunday attendance had dropped again, this time to 557 thousand, a decrease in just seven years of another 101 thousand weekly worshipers, or 15%.

In other words, the weekly attendance across the United States of the Episcopal Church dropped an average of  19,900 per year from 2000 to 2010 and then 14,400 from 2010 to 2007, or a 2.3% yearly average drop followed by a 2.2% yearly average fall.
In absolute numbers, it might appear that this rate of decline could continue for several more decades with current attendance numbers over half a million, but in reality the graying of the congregation combined with the lack of youthful members suggest that soon the rate of decline will likely accelerate, especially considering the extraordinarily liberal nature of the church today.
Some see the introduction of acrobatic performances in worship services, the Beyoncé Mass and costumed tree people as a desperate gasp for life in a dying church that has turned to hot button social issues and courting worldly controversy rather than truly worshiping God.
Embracing ultra-liberal issues of homosexual rights, pop culture spectacle and climate protests may put the church's name in the news, but can destroying foundational Christian beliefs bring more souls to Christ?

Editor for the Christian Herald, Tim Stanley, went so far as to cite Grace Cathedral's "worship" practices as proof that Western Christianity is "committing suicide." He wrote in a recent opinion piece that "They have transformed a faith that only extended as far as it did through preaching and martyrdom into something anxious and introspective, excessively concerned with gender pronouns and saving the redwood tree."
He goes on to argue that those that attend Grace Cathedral no longer have any distinct Christian message. Choosing o be tossed to and fro on the winds of social change, they are abandoned the core beliefs and foundational values that would otherwise make them a church at all.
The faith and beauty of the Anglican Communion is being lost one Beyoncé concert or one tree people pageant at a time.
See part of the procession here: