The Two-State Paradigm Is Over 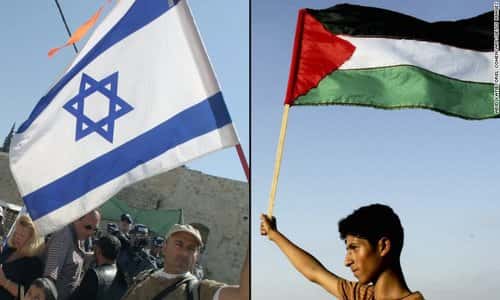 By Israel Kasnett/JNS.org October 18, 2018
Share this article:
U.S. President Donald Trump raised eyebrows recently during a joint press conference in New York with Israeli Prime Minister Benjamin Netanyahu when he backtracked on previous positions he held regarding the Israeli-Palestinian conflict, saying, "I like a two-state solution. That's what I think works best ... That's my feeling."
Those comments by Trump stood in stark contrast with remarks by the president earlier in his administration, when he said in a meeting in the White House with Netanyahu in February 2017 that he supports whatever solution the two parties decide. "I am looking at two-state, and one-state, and I like the one that both parties like. I'm very happy with the one that both parties like."

Nevertheless, Trump quickly backtracked on his remarks last month in New York.
Clarifying his recent comment, Trump explained, "One of the reporters who was screaming asked me about the one state, two-state, and I said I think the two states will happen."
Trump emphasized that he places the ultimate decision in the hands of the parties. "The bottom line is that if the Israelis and Palestinians want two states, I'm OK with that; if they want one state I'm OK with that. I'm the broker."
The comments came amid speculation regarding the release of his administration's highly anticipated Middle East peace plan, which the president has called the "deal of the century." Trump's son-in-law and senior adviser Jared Kushner, along with special envoy for Mideast negotiation Jason Greenblatt, have traveled to the region numerous times as part of developing their plan.
But experts who have followed the process closely question the feasibility of a comprehensive plan from the Trump administration, including whether or not a two-state solution could come to fruition in the current climate.
A century-long rejection of the two-state solution
Efraim Inbar, president of the Jerusalem Institute for Strategic Studies, told JNS, "It's not up to the president."
He views the idea of a Palestinian state as one that is improbable, at least for the time being. "The Palestinians are incapable of building a state," he said. "The main criteria of a state is the monopoly of control over use of force, and they have lost this monopoly. They cannot sustain state structures."

Turning to the region, Inbar pointed out that a number of Arab countries are failing, and suggested that perhaps the Palestinians would not fair better. "Look at Libya, Syria and Iraq," said Inbar. "They have great difficulty in just maintaining a state!"
Efraim Karsh, director of the Begin-Sadat Center for Strategic Studies, is more skeptical than Trump and agrees with Inbar.
He told JNS that "neither option seems to be on the cards since the one-state solution is unthinkable for Israel, whereas the two-state solution has been categorically rejected by the Palestinians. The 'one-state solution,' which has been the Arab position since the 1930s, envisages the transformation of Palestine into an Arab/Muslim state in which Jews will be reduced to a position of permanent 'tolerated minority' [or dhimmis, second-class citizens, as this status has been known throughout Islamic history]. Obviously, this option, which means the destruction of the State of Israel, is unacceptable for Israeli Jews."
Karsh decried the common misperception that Israel's rightful presence in Judea and Samaria perpetuates the Arab-Israeli conflict. "The left-wing fearmongering that Israel is rapidly sliding to this situation due to its continued 'occupation' of the territories is a red herring for the simple reason that since the beginning of 1996--and certainly following the completion of the redeployment from Hebron in January 1997--there has been no occupation.
Rather, 99 percent of the Palestinian population of the West Bank and the Gaza Strip have lived the rule of the Palestinian Authority [and Hamas in Gaza since 2007]. Under no circumstances will Israel agree to reassume control of this population, let alone make it fully-fledged Israeli citizens."
Karsh emphasized that it is continued Palestinian rejectionism that lies at the root of the problem. "On the other hand, while a de facto two-, or rather, three-state solution has effectively existed for quite some time--Hamas's Gaza state since 2007, the Palestinian Authority-controlled Areas A & B in the West Bank, and Israel--the Palestinians are certain to continue using the red herring of 'occupation' so long as Israel exists.
For while most Western observers apply the term 'occupation' to Israel's control of the Gaza Strip and the West Bank, captured during the June 1967 war, for Palestinians and Arabs, the Israeli presence in these territories represents only the latest chapter in an uninterrupted story of 'occupations' dating back to the very creation of Israel on 'stolen' land. Hence, their century-long rejection of the two-state solution."
"It doesn't matter what the international community wants," stressed Inbar. "The Palestinians are incapable of having a state. Soon, there will be a violent struggle over who will be the next leader of the Palestinian Authority. It's a moot question. The two-state paradigm is over. I don't know what the alternative is, but we will not see a Palestinian state."
He added that there is "growing skepticism" around the world of the Palestinians' ability even to create and sustain an independent state.
For Inbar, Israel would be better off not intensely pursuing a one-state or two-state solution that would just introduce more complications, especially if the Palestinians do not intend to live in peace alongside Israel.
"Sometimes," he said, "ambiguity serves us better than a clear solution."
Originally published at JNS.org - reposted with permission.