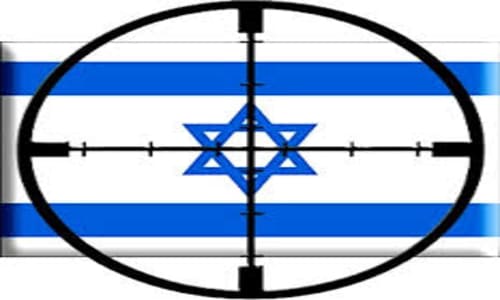 By Karen McDonough/JNS.org February 11, 2019
Share this article:
The disturbing trend that US public schools are fast becoming a new ground for anti-Israel activism should concern every American -- not just the Jewish community.
Non-profit watchdog groups and scholars that track antisemitism have sounded a warning that anti-Israel bias has crept into middle school and high school classrooms around the country.
Jewish organizations have for years tracked anti-Israel activism on university campuses, but now this type of material is reaching our public schools.
The Boston suburb of Newton, which is predominantly Jewish, has been ground zero for anti-Israel bias in public schools for several years. But Newton is not the only place this is going on.
I recently discovered that the Charleston, South Carolina area high school where my son is a student is teaching the Israeli-Palestinian conflict from material produced by Jewish Voice for Peace (JVP), the anti-Zionist group that promotes the elimination of the Jewish state of Israel. They are major proponents of the BDS movement. There is a body of evidence linking BDS organizations to international terror groups, according to a recent Israeli government report.
The material shown to ninth-graders in the Charleston County School District includes a JVP animated video, an oversimplified depiction of the Israel-Palestinian conflict that's both historically inaccurate and offensive. The video portrays Israel as the oppressor and Palestinians as victims.
It depicts former Palestinian leader Yasser Arafat without mentioning that the Palestinian Liberation Organization (PLO) is a terrorist group. At the end of the video, students are urged to boycott the State of Israel.
Going further, students are given a written quiz where the material from the video is re-emphasized. Some of the questions include, "Where do Palestinians live? Answer: In refugee camps. What was Israel founded as? Answer: A Jewish state. What was practiced against non-Jews? Answer: Discrimination. What are Israelis doing to Palestine to gain more land? Answer: They're taking over, destroying, arresting."

Presenting one favored side of the Middle East conflict without any effort to counterbalance it shows a clear bias. The delegitimization of Israel in the classroom, and influencing uninformed teens to join the BDS movement, is wrong and should not go unnoticed by the community. Promoting the boycott of the Jewish state has no place in public education.
Never mind that South Carolina was the first state to pass an anti-BDS bill signed into law by former US Ambassador to the United Nations Nikki Haley when she was governor.
We're living at a time when anti-Israel bias is rampant on college campuses and in higher education. That agenda, experts say, has trickled down to the public schools through instructors who are trained at colleges that often teach and promote anti-Israel activism. They become comfortable teaching antisemitic material, and make it part of their curriculum.
But let's remember that the Establishment Clause in the First Amendment of the Constitution prohibits our government from unduly favoring one religion over another. Further, the Constitution prohibits public schools from choosing sides in religious matters. And yet we're seeing anti-Israel and anti-Jewish lessons being taught in American public schools.

In Newton, parents and the community were outraged to discover that the high school, in 2011, was teaching anti-Israel and antisemitic material from the Arab World Studies Notebook, which was funded by Saudi oil company ARAMCO and the Qatari government.
The school was forced to remove the book from the curriculum, though other antisemitic lessons continued for years. The school superintendent is accused of ignoring concerns of the Jewish community, who argue that anti-Israel, antisemitic, and false information continues to be taught along with the promotion of Islamic religious beliefs.
After nearly seven years of battling school and elected officials over the issue, last summer a lawsuit was filed on behalf of three Newton residents over allegations that school officials violated open meeting laws when comments about the antisemitic lessons were wiped from the meeting records.
If it can happen in Newton, it can happen anywhere.
Concern alone will not reverse this trend, nor will it stop public-school teachers from presenting anti-Israel material.
This is not just a Jewish problem. Anti-Israel activism is being taught to children of all religions in the public schools. We need to come together as communities and raise our voices against this emerging practice. Unless we do so, the trend will only continue and may even become the norm.
Originally published at JNS.org - reposted with permission.