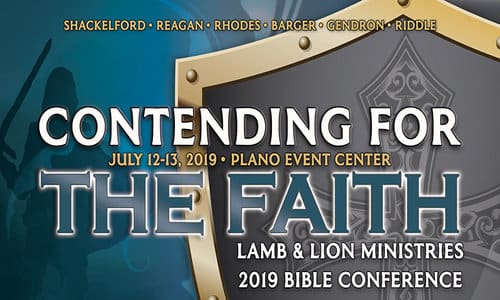 By PNW Staff July 11, 2019
Share this article:
You're invited to watch the Lamb & Lion Ministries Annual Bible Conference via Live-Stream! The theme for 2019 is "Contending for the Faith" (Jude 1:3). Christianity is under attack in this nation as never before, and we therefore decided to focus our conference on defending the fundamentals of our faith.
The Live-Stream will begin at 6:30 PM CST on July 12.  Please click here for further event details and to connect to the Youtube channel that will stream the conference.

Here are further details:
Concert
Our annual conference will begin on Friday evening with a musical concert that is followed by the keynote speaker. The featured musician this year will be Marty Goetz. Marty is no stranger to our supporters. He has been our featured musician in two previous conferences, and we spotlight his music each year in a special TV program that we always air as our last program of the year.
Marty Goetz is a Messianic Jew who has been called a "modern day psalmist." His songs are scriptures beautifully set to music, leaving listeners spiritually moved, inspired and educated. With melodic and fresh acoustical and classic arrangements, Marty has the ability to lead you into a place of true intimacy with God.
And unlike his appearances at two of our previous conferences, this year Marty has agreed to stay over all day Saturday to sing a song before each speaker!
Friday's Keynote Speaker
Speaker: Kelly Shackelford, Founder and CEO of First Liberty Institute
Topic: "Defending Christian Freedoms"
We have lined up a stellar group of speakers. Kelly Shackelford will present the keynote address on Friday evening. He is the founder and CEO of First Liberty Institute, the largest legal firm in the nation dedicated exclusively to protecting religious freedom for all Americans.
He has served in this role since 1997, leading First Liberty's efforts to defend religious freedom in the courts and in the public arena. Under his leadership, First Liberty's legal team has participated in cases before the United States Supreme Court, federal courts of appeals, federal district courts and various state courts, where they have won more than 90 percent of their cases.

Shackelford is a constitutional scholar who has personally argued before the United States Supreme Court, testified before the U.S. House and Senate, and has won a number of landmark First Amendment and religious liberty cases.
He was recently named one of the 25 greatest Texas lawyers of the past quarter-century by Texas Lawyer and is the recipient of the prestigious William Bentley Ball Award for Life and Religious Freedom Defense for pioneering work protecting religious freedom.
He has spoken at our conferences before, and he is back by popular demand.
Saturday's Speakers
Other speakers and their topics include:
Mike Riddle
Topic: "Defending Creation as the Origin of the Universe"
Bio: Founder and President of Creation Training Initiative. An international speaker and teacher on biblical creation, apologetics and Christian education. He has been involved in creation apologetics for over 35 years.
Mike Gendron
Topic: "Defending the Bible and the Gospel"
Bio: A devout Catholic for over 30 years before he discovered the truth of God's Word. During that time, Mike had a very successful career in corporate management. In 1988, he surrendered his career to enter full-time ministry and founded Proclaiming the Gospel Ministry.

Ron Rhodes
Topic: "Defending Jesus' Promise to Return"
Bio: President of Reasoning from the Scripture Ministries. Prolific author of over 50 books. Holds a doctorate in systematic theology from Dallas Theological Seminary, and specializes in the field of apologetics.
Eric Barger
Topic: "Defending the Church from the Emergent Church Movement"
Bio: A leading expert in Christian apologetics and discernment, his ministry, Take a Stand!, confronts both the culture and the Church, focusing on the Cults, World Religions, the Occult and Spiritual Warfare.
David Reagan
Topic: "Defending the Deity of Jesus"
Bio: Founder and Sr. Evangelist of Lamb & Lion Ministries. Host of "Christ in Prophecy," a worldwide television program. Editor of the Lamplighter magazine. Acclaimed author of many books and material on Bible prophecy.