Saving Pastors Lives: A Call To Help Those Struggling With Ideas Of Suicide 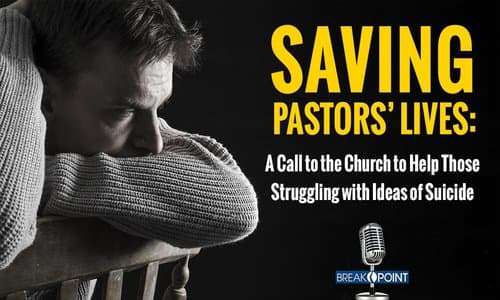 By John Stonestreet/Breakpoint.org September 19, 2019
Share this article:
Tragically, last week we all learned that Jarrid Wilson, associate pastor of Harvest Christian Fellowship Church in Riverside, California, had committed suicide. He was a husband and the father of two. He was only 30 years old.
Jarrid had founded a ministry called "Anthem of Hope," in order to minister to people with depression and suicidal ideations. He ended his life on the same day he officiated the funeral of a Christian who had ended hers.
About a year ago, Andrew Stoecklin, another 30-year-old pastor from California, also committed suicide. Like Wilson, he shared openly about his own battles with depression and anxiety.

About a year before that, Wisconsin Pastor Bill Lenz took his life after bouts of depression and anxiety. Like Wilson, he had ministered extensively to many with depression and suicidal ideation, and had created a suicide-prevention ministry.
In the fog of questions and grief, one thing is clear: Neither Christians nor Christian pastors are immune from the suicide epidemic that's sweeping our country.
According to the Los Angeles Times, 2017 is "the latest year for which reliable statistics are available”, and in that year the U.S. suicide rate hit a 50 year high…
Whether they are densely populated or deeply rural, few communities in the United States have escaped a shocking increase in suicides over the last two decades. From 1999 to 2016, suicide claimed the lives of 453,577 adults between the ages of 25 and 64 — enough to fill more than 1,000 jumbo jets.
My friend Ed Stetzer wrote, in response to Wilson's death, that while all suicides are shocking, stories of pastors and other Christian leaders who take their own lives "cause questions to arise," questions that are unique.
Among them must be, why is there still such a lack of awareness about the emotional, psychological, and spiritual struggles pastors face?
And also, where can pastors turn for help?

It's no surprise that so many pastors and ministry leaders are reluctant to admit that they are struggling with sin, with depression, or with their family. They especially struggle to be vulnerable with those who "hold the power of the purse" in their lives and can shape the future of their careers.
And, as Stetzer pointed out in his article, there is an evangelical reluctance to look outside Christian circles for assistance, especially when it comes to mental health issues. It's as if by doing so, we'd be admitting that the Christian faith is somehow inadequate.
It isn't, of course. The Christian faith not only explains who we are, it explains why truth and health can be found by those who carefully study God's world. As Ed put it, "God does not fix it all...Yet." Or as Wilson himself wrote on Twitter the day he died, "Loving Jesus doesn't always cure suicidal thoughts," and "Loving Jesus doesn't always cure depression," or "PTSD and anxiety, for that matter."
Wilson ended his life on the eve of World Suicide Prevention Day, a day intended to draw attention to the enormity of the crisis in the U.S. and around the world.
In connection with World Suicide Day, and in order to help us all answer the one question we should be asking right now--what can we do?--my friend Jeremiah Johnston has written an article explaining how Christians can make a difference when it comes to suicide and depression. It starts with knowing more about suicide and its causes.

Among the most important thing to know is that "Mental illness is not a character flaw; it's a disease." Similarly, it's "not a spiritual problem" in the sense it can be fixed with just "more faith" or "more church."  Mental illness is a treatable medical condition.
There remains too much stigma and shame in Christian circles when it comes to mental illness. That has to stop. Mental illness is treatable, but only if it's treated. By supporting those around us, the church can help make that more likely. So let's help.
Just as Christians in the Roman Empire ran towards epidemics while everyone else was running away from them, we have a chance today to do the same.
If you who are suffering from depression or suicidal thoughts: Please, seek help. There are folks who love you, care for you, and want to help. If you need help immediately, call the National Suicide Prevention Lifeline: 1-800-273-TALK. That's 1-800-273-TALK.
Originally published at Breakpoint.org - reposted with permission.