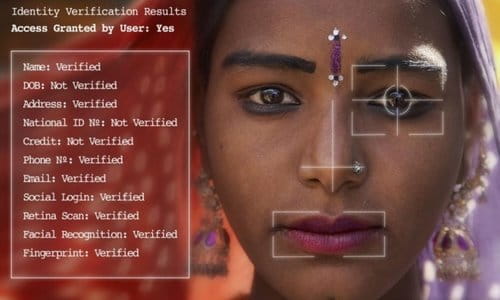 By Daniel Taylor/Activist Post December 09, 2019
Share this article:
It's not just a social credit score system spreading around the world from China that threatens the free people of the world; India's Aadhaar National ID program has the full support of Bill Gates and the World Bank as a model for other countries to follow.
Gates said in a 2018 CNBC interview that it was "too bad" if someone thought that Aadhaar was a privacy issue.

The Gates Foundation has pledged to fund the World Bank in an effort to take the ID program to other countries.
Despite Gates plea that there are no privacy issues with Aadhaar, several court cases have gone to India's supreme court on grounds of privacy violations.
The ID system has had serious security breaches, with access to a billion identities being sold for less than $10 through WhatsApp.
One of the court filings (Mathew Thomas vs Union of India) details the rise of China's social credit system, comparing the Indian Aadhaar initiative to the Chinese program.

Perhaps the most sensational angle to this story is that the same international tech company that provides the infrastructure to Aadhaar also makes drivers licenses in the United States.
Idemia (formerly Morpho), is a billion dollar multinational corporation. It is responsible for building a significant portion of the world's biometric surveillance and security systems, operating in about 70 countries.
Some American clients of the company include the Department of Defense, Homeland Security, and the FBI.
The company website says that Morpho has been "...building and managing databases of entire populations..." for many years.

In the United States, Idemia is involved in the making of state issued drivers licenses in 42 states.
Idemia is now pushing digital license trials in the U.S. Delaware and Iowa are among five states involved in the trials this year. With the mobile licenses, law enforcement will be able to wirelessly "ping" a drivers smartphone for their license.
The Indian government recently announced a facial recognition program to monitor all social media platforms, called the Advanced Application for Social Media Analytics.
Big tech companies are using China, India, South Korea and other countries as testing grounds for smart cities, surveillance systems and command and control tech that are being stealthily rolled out in the West.
Originally published at Activist Post - reposted with permission.