'Berning' the Jews: Sanders And The Democratic Platform Committee 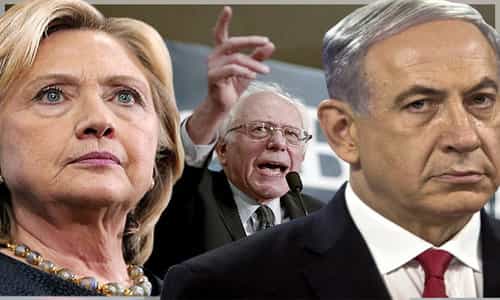 By Edward Alexander/Algemeiner.com May 30, 2016
Share this article:
In mid-April of this year the exigencies of an impending primary election in New York, where he lagged far behind Hillary Clinton among likely Jewish Democratic voters, forced Bernie Sanders to suspend his national Jewish "outreach" coordinator--one Simone Zimmerman.

It was revealed that her ostensibly warm Jewish heart had a very cold spot reserved for Israel. That he had appointed such a person to such a position in the first place was a true indication of where Sanders' own sympathies lay. Any uncertainty about this was put to rest in a debate in Brooklyn where he said: "I believe the United States and the rest of the world have got to work together to help the Palestinian people." He is now practicing what he preached.
No sooner did a desperate Hillary Clinton direct the head of the DNC to bestow upon Sanders five of the fifteen positions on the Democratic Party's platform committee than he hastened to fill two of them with well-known Israel-haters, or what he calls "helpers" of the Palestinian people, and a third with a politician who is a convert to Islam and once recommended Louis Farrakhan as "a role model for black youth," and "not an anti-Semite."
Sanders has in the past displayed unseemly envy and sycophantic admiration of foreign countries--the socialism of Sweden, the dictatorship of Nicaragua, the health care of Cuba, the charms of Yaroslavl as honeymoon site and sister city to Burlington, Vermont. But these appointments reveal not only his belief that the key to American foreign policy is the Arab-Israeli conflict, but that Israel's "intransigence" is the cause of the manifold miseries of the Middle East--a view that even the State Department and its most dogmatic peace-processors have finally, albeit with great sadness, abandoned.
First among Sanders' "Palestine" trio is James Zogby, founder and president of the Arab-American Institute. He rose to prominence in 1979, when he campaigned on behalf of the National Emergency Committee to Defend Ziad Abu Eain and prevent his extradition to Israel for taking part in a bombing in Tiberias that had killed two Israeli teenagers and wounded 36 others. The effort failed, and Abu Eain spent four years of a longer sentence in an Israeli jail (before being released in a prisoner exchange).
Zogby has for many years, usually within the Democratic Party, worked to redress what he considers the excessive influence of American Jews upon foreign policy. He is a firm believer in the Israeli-Nazi equation: how dare the Jews monopolize all that beautiful Holocaust suffering which the Palestinians, ex post facto, would very much like to share? Besides, reasons Zogby, if the Palestinians are the new Jews, then of course the Israelis must be the new Nazis. None of this has disturbed Sanders, a Jew who refers to himself with the evasive locution: "proud child of Polish immigrants."
Sanders' second appointee is Cornel West, the perpetually frenzied black academic who has condemned President Obama himself as "a black mascot of Wall Street oligarchs and a black puppet of corporate  plutocrats." West is the longtime associate of Michael Lerner, who pioneered the Palestinian cause within the Jewish community, and was once Hillary Clinton's Rasputin in the White House. West endorsed Sanders's candidacy at an early stage of the campaign, and just after publicly summoning a number of prominent blacks to call for the elimination of Israel from the family of nations.
Sanders did not flinch from the endorsement or regret its timing; and now West has been rewarded. This appointment, more than any other, expresses Sanders' desire [to] epater les Juifs; the eminent sociologist Werner Cohn shrewdly calls it Sanders' declaration of "a final break with the Jewish people."
The third "Palestinian" appointment is Keith Ellison, a Catholic convert to Islam who is a congressman from Minnesota. Unlike Zogby and West, he has not made the end of Israel his raison d'etre, but he has long maintained warm and supportive relations with such apologists for Palestinian terrorism as CAIR (Council on American-Islamic Relations), a front group for Hamas. He has come to its defense against allegations brought by the FBI and members of  Congress.
In October 2006  he was the keynote speaker at a CAIR conference in Florida. In 2008 he called on listeners to a local Tampa radio station to give their support to Sami al-Arian. Arian, a former professor at University of South Florida, had confessed two years earlier to conspiring to supply goods and services to Palestinian Islamic Jihad, a terrorist organization responsible for numerous suicide attacks on Israel.
Sanders' appointment of this trio expresses his confidence (perhaps justified) that devotion to the Palestinian cause is not only the litmus test of modern progressivism but is now even dearer to the hearts of Democratic voters than abortion, gay marriage, "All Gender" bathrooms, and other liberal ventures into the legalization of forbidden fruit.
Sanders did show some awareness of foreign countries other than Israel and "Palestine" by  giving one of the two remaining spots on the DNC platform committee to a global warming zealot who also advocates the "only one child per family" scheme, which has had such an exciting history in China.
There is, to be sure, one way in which Israel really is at the center of world affairs: it is the way of hallucination. "We live in an age," observed David Nirenberg in his history of anti-Judaism, "in which millions of people are exposed daily to some variant of the argument that the challenges of the world they live in are best explained in terms of 'Israel.'"

Sanders constantly repeats that all he desires in American Middle East policy is greater "even-handedness," i.e., less "favoritism" on behalf of Israel. What this really means is that Israel must be deprived of its single powerful ally in the UN and in world affairs generally. On May 25, for example, the World Health Organization voted for a UN resolution to single out Israel as the only violator of "elemental, physical and environmental health" in the world, and commissioned a WHO delegation to investigate and report on "the health conditions in the occupied Palestinian territory."
The United Kingdom, France, Germany, Sweden, and other European Union states voted "Yes" to singling out Israel as the world's only violator of human decency in medical matters. The UN assembly did not address Syrian hospitals being bombed by Syrian and Russian warplanes, or millions of Yemenis denied access to food and water by the Saudi-led bombings and blockade; neither did it pass a resolution about Venezuelan citizens being starved by their (Sanders-style) "democratic socialist" government. Out of 24 items on the meeting's agenda, only one, Item No. 19 against Israel, focused on a specific country.
For good measure a WHO delegation was commissioned to investigate health conditions in "the occupied Syrian Golan." No doubt these same nations would much prefer that ISIS take charge of the Golan inhabitants' health and well-being. In such situations, the United States, even under the reign of Obama, remains Israel's only reliable ally and support. "Even-handedness" has long been a euphemism for abandonment.
But that aspect of the matter does not interest Sanders. That Israeli Jews have been under attack in a siege, at once military and ideological, that has lasted for 68 years is no more likely to interfere with his telescopic philanthropy than is the current plight of Jewish students right here in American universities to arouse his sympathy. These students are constantly assailed, physically as well as verbally, by the same thuggish "progressives" who have carried the "Bernie" banners and worn the "Bernie" shirts in the anti-Trump riots in Chicago and Nevada.
One aspect of the American "exceptionalism" that has so often provoked Barack Obama's sneer is the near absence of antisemitism from our national politics. It would be ironic if it were now introduced into the political arena by a Jew. Sanders, let us remember, is a disciple of Noam Chomsky, whom Mayor Sanders of Burlington liked to bring to a town that needed its own foreign policy as "a very vocal and important voice in the wilderness of intellectual life in America...a person who [sic] I think we're all very proud of."
Chomsky, too, has endorsed his friend Sanders for the Democratic nomination; and he must be  greatly pleased by the way in which his disciple has gone him one point better by promoting a negative political campaign against the "one percent," in the very best tradition of demagogic European assaults on the Tenth Commandment, the culminating one, against covetousness.
It should come as no surprise that a modern American Jew has opened the door to antisemitism in American politics. In 2008, shortly after I had written about the spread of anti-Israel venom in segments of the Democratic Party, the late Barry Rubin (an eminent scholar of Middle Eastern affairs) sent me a consolatory note: "Well, look at the bright side, we're not doing so badly.
Take away the Jews and Muslims in America and people like Israel!" We already have a plethora of hole and corner sects of Jews arrayed against Israel: Jewish Progressives against Israel; Holocaust Survivors against Israel; J Street (a favorite of Sanders'); Children of Holocaust Survivors against Israel; Jewish Voice for Peace; Survivors of the Warsaw Ghetto against Israel; Jewish postmodernists against Israel; Grandchildren of  Holocaust survivors against Israel; Jewish Berkeley Professors against Israel; and so on and on, ad infinitum, ad nauseam.
But Sanders' campaign, which is by now less for the presidency than for doctrinal control of the Democratic Party by its left wing, has taken this campaign for politicide to a new level.
Originally published at Algemeiner.com - reposted with permission.