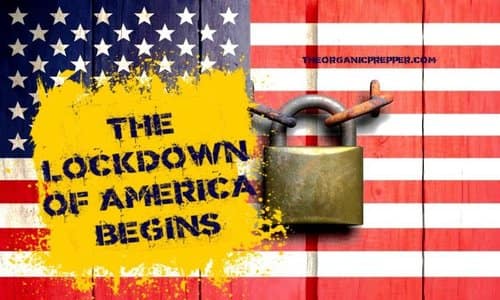 By Michael Snyder/End of the American Dream March 23, 2020
Share this article:
It seems like just yesterday that I was warning that the same sort of lockdowns that were occurring in Italy and China would soon be instituted here, and now it is actually happening.
You are now going to see the states fall like dominoes as they all get in line to join the lockdown.  Ohio and Louisiana have now joined other states in ordering residents to stay at home to help curb the spread of the coronavirus.
The states in lockdown now include - New Jersey, California, New York, Illinois, Connecticut, Pennsylvania, Oregon, Texas & Massachusetts - with a total of 167.5 million people now affected.
Of course our politicians are attempting to put a positive spin on their directives by referring to them as "shelter-in-place" orders, and they are promising us that they are only "temporary".
As of Saturday night, a total of 323 people infected with the disease have died and many medical experts are warning that this is only the very beginning of this crisis.
As long as the number of confirmed cases and the death toll are both rising at an exponential rate, these "shelter-in place" orders will remain in effect, and Americans will become increasingly frustrated about having to remain in their own homes.

On Friday, two of the biggest states in the entire country decided that it was time to shut virtually everything down...
On Friday, NY Gov. Andrew Cuomo issued a total ban on non-essential businesses and warned there would be strict fines for any businesses that do not comply. It will go into effect on Sunday evening and is indefinite.
But of course some businesses will remain open.  The following is a list of some of the businesses in New York that are exempt from the order...
- Hospitals and medical services
- Grocery Stores
- Pharmacies
- Government workers
- Mass transit
- Some food services and restaurant delivery
- News organizations
- Cuomo said he does not know if laundromats apply
The effectiveness of such an order is definitely open to debate.  As thousands upon thousands of New Yorkers circulate through local grocery stores and pharmacies, it is inevitable that the virus will continue to spread.
But at least doing this is better than nothing.
These orders by other governors came about 24 hours after California instituted similar measures...
The stay home order is in place till further notice.
All dine-in restaurants, bars and clubs, gyms and fitness studios will be closed, according to the order. Public events and gatherings are also not allowed. Essential services will stay open, however, such as pharmacies, grocery stores, takeout and delivery restaurants, and banks.
They are being told to only go out for exercise, to the grocery store or to seek medical care, and can pick up take-out from restaurants - so long as those restaurants can keep themselves afloat. Many have already closed their doors.
Wow.
We haven't reached the point of a total "national lockdown" just yet, but it will sure start to feel like it as one state after another issues similar orders.

I am really struggling to find the words to describe how utterly devastating that this is going to be for the U.S. economy.  The number of people filing for unemployment benefits is absolutely exploding all over the country, and financial markets have been plunging as investors anticipate the economic nightmare that is coming.
Many are hoping that the lockdowns that are being instituted now will last for only a few weeks and then life can start to get back to normal.
But Italy has already been locked down for an extended period of time, and the number of people dying in that country just hit another daily record...
Italy has recorded its highest day-to-day-rise in the number of deaths of people infected with the new coronavirus.
Civil Protection Chief Angelo Borrelli said Friday the country recorded 627 more deaths in the 24 hours since Italy surpassed China on Thursday as the nation with the most COVID-19-related deaths. Another 651 Italians died on Sunday, bringing the overall toll to more than 5,400. Nearly 60,000 people across the country are confirmed to have the virus.
And many Americans are simply too stubborn to follow these lockdown orders.
In fact, many Americans are too stupid to even use basic common sense.  Just check out the following example...
The latest incident occurred in the Washington exurb of Purcellville, Virginia, some 55 miles from the White House.
According to a Purcellville Police Department report, "An incident occurred at a local grocery store involving juveniles reportedly coughing on produce, while filming themselves and posting it on social media."
Are you kidding me?
Coughing on produce and then posting it on social media?
Some people will do anything to get attention.

I really do hope that more Americans start taking this pandemic seriously.  The number of confirmed cases in the U.S. will pass the 30,000 mark this weekend, and we just learned that a member of Vice-President Mike Pence's staff has tested positive...
A member of Vice President Mike Pence's staff has tested positive for coronavirus, the White House said Friday, marking the first such infection within the top rungs of the administration.
Katie Miller, a spokeswoman for Pence, did not identify the staffer, nor did she say specifically where the individual worked. Pence is leading the administration's coronavirus task force and has been a regular presence at the president's side in recent weeks.
Senator Rand Paul, R-Ky., on Sunday became the first senator known to have tested positive for COVID-19.
The National Guard has been activated in many states and other Guard members are on "enhanced readiness" status. If you can take their word for it, all the governors assure us that they're only there to help dispense supplies, not to enforce lockdowns.
Numerous people have reported being given "travel papers" over the past 48 hours. People working in food delivery, the medical field, distribution, and grocery stores have said that they've received papers from their employers to "show to the police" if they're stopped during their travel to and from work.
This pandemic is going to change life in America permanently, and the truth is that COVID-19 is just one element of "the perfect storm" that is now upon us.
Economic activity is coming to a screeching halt all over the nation, anger and frustration were already at extremely dangerous levels before this pandemic started, and if these lockdown orders stretch on for many months to come it is only a matter of time before we see tremendous civil unrest start to erupt.
Everything that we have been warning about for so long is starting to come to fruition, and the days ahead are going to be extremely challenging for all Americans.
Originally published at End Of The American Dream - reposted with permission.