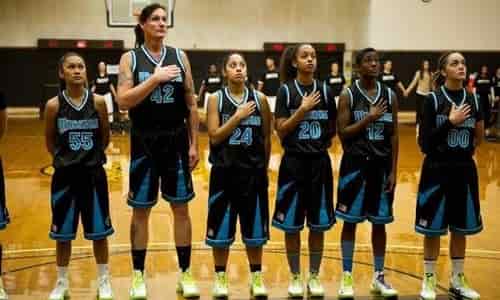 By Michael L. Brown/askdrbrown.org June 13, 2016
Share this article:
It wasn't enough for the NBA to celebrate the coming out of Jason Collins, although he was only a marginal player in the league, although his identical twin brother was not gay, and although his long-time girlfriend was surprised to learn he was gay.
It wasn't enough for the NBA to slap players with stiff fines for making "anti-gay" comments, especially after a well-known NBA ref came out as gay.
It wasn't enough for the NBA to threaten to punish the city of Charlotte, North Carolina with the removal of next year's All-Star game from the city unless the state allowed men to share locker rooms with women and girls.
No, the NBA had to take another, aggressive step, announcing that it is now partnering with GLSEN, the leading gay activist educational organization.
As the official announcement declares, "In celebration of LGBT Pride Month, we're excited to announce a new collaboration between the NBA, GLSEN, and Teespring.
Beginning on June 7, fans can purchase an exclusive line of Teespring NBA Pride T-shirts featuring the logos of all 30 NBA teams, with all proceeds benefiting GLSEN."
Yes, you can now get T-shirts of your favorite NBA team featuring a rainbow-colored version of their logo.
How in the world did this happen? And does the general public really know what GLSEN stands for?
Just a few days ago, I published an article documenting GLSEN's radical activism dating back more than a decade, including: class activities for elementary school students such as "Deconstructing Definitions of Family" and "Discovering Your Inner Trannie" (meaning, of course, your inner transgender identity); a lesson plan that included a section on "cross dressing and non-gender conforming clothing," with the cross dressing lesson entitled, "What's With the Dress, Jack?"; vocabulary cards defining terms like "Genderqueer" as, "People who do not identify, or who do not express themselves as completely male or female; may or may not identify as transgender."
And I remind you: This was what GLSEN was pushing more than a decade ago in our children's elementary schools.

What is GLSEN pushing now? And the NBA has entered into a special partnership with them to celebrate Gay Pride?
I thought this was the National Basketball Association, not the National Gay Association. And how do the players really feel about this, especially those with conservative Christian (or Muslim) values?
I don't know much about the background of Adam Silver, the NBA's current commissioner, but I do know that Roger Goodell, the commission of the NFL (which is also strongly pro-gay activist) has a gay brother whom he protected over the years against bullies.
This would help to explain Goodell's aggressive pro-gay activist stances, along with this being the PC thing to do these days.
Whatever is motivating Silver, one can only wonder how far this will go. But already, an important question has been raised by one of my Facebook friends. He wondered aloud if the WNBA would be willing to accept an NBA player who came out as a transgender woman. Why not?
The WNBA is certainly well-known for its openly lesbian players, so, in fairness to all aspects of LGBT activism (and in keeping with Silver's stand against North Carolina), shouldn't the NBA affirm transgender identity as well?
It's unlikely that even a great WNBA player could make it as a transgender man in the NBA, but what about the reverse? What if, say, Shaquille O'Neal in his prime came out as transgender, changing his name to Shanita.
He would have become the greatest women's player in history, smashing all records and dominating all games. And if anyone protested this as unfair, that person would quickly be branded an intolerant, bigoted transphobe, with Commission Silver adding in his Amen.
Of course, I recognize that the NBA and the WNBA are two separate leagues, but perhaps Silver could confirm if he, indeed, would back this and, for argument's sake, would have affirmed Jason Collins as Janet Collins and given his blessing to Collins becoming a WNBA superstar.
What say you, Commission Silver?
After all, this is the very policy he is advocating for North Carolina, in which a boy who identifies as a girl can play on the girls' sports teams and share their locker rooms and showers, regardless of the terrible unfairness of it all. Why not carry this out on the pro-level as well?
If you truly embrace LGBT activism, Mr. Silver, and really want to celebrate gay pride, how about going all in?
Originally published at askdrbrown.org - reposted with permission.