Recognizing The Signs Of The Times - A Warning To Our Generation 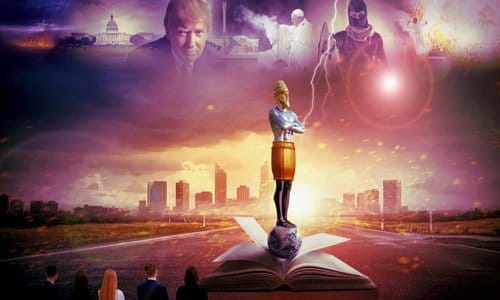 By Britt Gillette/End Times Bible Prophecy June 22, 2020
Share this article:
About two thousand years ago, Jesus rebuked the religious elites of His day. He criticized them for their failure to recognize His Coming. He told them, "You know how to look at the sky and predict the weather, but you don't know how to recognize the signs of the times" (Matthew 16:1-3).
Just like you and me, the religious leaders could see dark clouds on the horizon and know a rain storm was on its way. In the same manner, Jesus said they should have seen the signs and prepared for His arrival. The Pharisees and Sadducees knew the Old Testament Messianic prophecies, yet they failed to recognize the Messiah.
But their failure is relevant to our day and time as well. Why? Because Jesus wasn't simply addressing the Pharisees and Sadducees when He said this. He had a second audience in mind - you and me. That's right. Jesus was also talking to our generation.
The Bible is filled with prophecies about the Second Coming, and Jesus commanded us to watch for Him (Mark 13:35-37). Our generation is also expected to recognize the "signs of the times." But are we? Do you recognize the signs of the times?

The World is Complacent
Unfortunately, much of the world (including a large number of Christians) are not watching for Jesus. They're asleep when it comes to the Second Coming, even though Jesus warned against it. Why do I say the world is asleep? Because right now, a flood of signs surround us. Never before have so many signs of the Second Coming been present. Here are just a few from 2020:
COVID-19 - Since emerging in Wuhan, China is late 2019, COVID-19 (a.k.a. "the coronavirus") has wreaked havoc on the world stage. It first led to the shutdown of several major cities in China. Eventually, the shutdowns spread to the rest of China, then Italy, Spain, the United States, and countless countries throughout the world. While many nations have made inroads to "flatten the curve" and even force a decline in new cases, the coronavirus is far from gone.
Many fear a "second wave" while others argue the first wave never went away. While some local areas may have temporarily seen a decline in case counts, the number of new confirmed global cases has grown from 2 million in mid-April to over 8 million today. That's a four-fold increase in two months.
Far from being in the rearview mirror, the coronavirus pandemic is still an ongoing global emergency. A form of pestilence, it's one of the signs Jesus told His followers to look for (Luke 21:11).
Global Riots - In late May, the murder of George Floyd at the hands of a Minneapolis police officer sparked nationwide protests in the United States. Unfortunately, alongside countless peaceful protests, riots erupted in several cities. Minneapolis saw several days of riots, looting, and burning buildings following Floyd's death. In Seattle, the police and National Guard have abandoned six city blocks in the downtown area, ceding control to various radical groups.
In Atlanta, rioters attacked the global headquarters of CNN. In London, authorities boarded up a statue of Winston Churchill to protect it from those threatening to tear it down. Throughout the world, we see images of arson, looting, and mayhem as a spirit of lawlessness prevails. The Bible says this is what people will be like in the last days (2 Timothy 3:1-5).
A Global Depression - Despite all the talk of a "V-shaped" recovery for the economy, no such thing is happening. The global travel industry is a fraction of what it was in early January, and it will likely be years before we see travel return to the old "normal." Restaurants, hotels, and retail outlets have a fraction of the foot traffic they once had.
Last week, the Organization for Economic Co-operation and Development estimated global GDP could plummet as much as 7.6% this year - twice what it previously announced in March. The World Bank estimates global GDP will fall 6.2%. If these figures are correct, the current economic downturn will be twice as bad as the Great Recession and the worst economic contraction since the Great Depression.

Last week also brought bad news on the employment front. More than 1.5 million people in the United States filed new unemployment claims. This is after most states have "re-opened" their economies. To put this number in perspective, prior to March, the largest weekly unemployment claim number in U.S. history was 695,000 in October 1982.
Even with many people returning to their jobs following state restrictions, continuing unemployment claims remain over 20 million. This is the worst global economy since the Great Depression, and it doesn't look like it will get better any time soon. This creates fertile ground for the rise of a dictator. The Great Depression paved the way for Adolph Hitler. The Bible says a similar economic catastrophe will pave the way for the Antichrist (Revelation 6:5-6).
Swarms of Locusts - This year also saw the emergence of one of the worst locust plagues in decades. Swarms of billions of locusts, ranging anywhere from a third of a mile to a 100 square miles or more, have attacked crops on two continents. The hardest hit areas so far have included East Africa (Kenya, Somalia, Sudan, South Sudan, Uganda, and Ethiopia), the Middle East (Yemen, Saudi Arabia, and Iran), and Southwest Asia (Afghanistan, Pakistan, and India).
The U.N. Food and Agriculture Organization projects these swarms will continue to thrive and spread well into late-July. As these locust swarms destroy crops, millions face the prospect of famine in parts of the world where food insecurity is already common. Famine is one of the signs Jesus said to look for (Matthew 24:7).
Rumors of War - On July 1, the Israeli government will formally consider annexation of large parts of the West Bank. If it does, Jordan has said it will end its 27 year-old peace treaty with the Jewish State. The Palestinian Authority has said it will end its relationship with Israel, and Hamas has warned any such annexation will ignite a new Intifada.
If Israel moves forward with plans to annex all or part of the West Bank, it will almost certainly face widespread condemnation in the international community and violent resistance from its longtime enemies. Only time will tell what July brings, but rumors of war are widespread. Jesus said rumors of war will be another sign of His coming (Matthew 24:6).