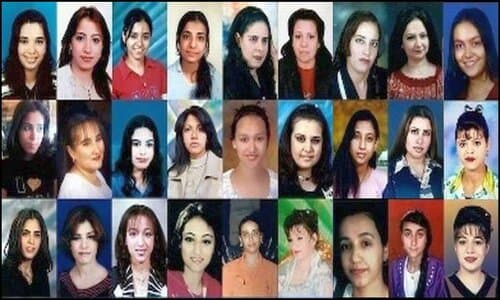 By Raymond Ibrahim/Gatestone Institute September 30, 2020
Share this article:
The kidnapping, sexual abuse and forced conversion of Christian women and girls in Egypt -- a "particularly vulnerable group to exploitation" that is quietly living an "unimaginable nightmare" -- is rampant, with no signs of easing up. This is the finding of a report published on September 10, 2020 by Coptic Solidarity, an international organization based in Washington D.C., that works to promote equal citizenship rights for Egypt's Christian minority.
In its 15-page report, "'Jihad of the Womb': Trafficking of Coptic Women & Girls in Egypt," Coptic Solidarity documents "the widespread practice of abduction and trafficking" and estimates that there have been "about 500 cases within the last decade, where elements of coercion were used that amount to trafficking," according to the UN's own definitions, particularly per its "Protocol to Prevent, Suppress and Punish Trafficking in Persons Especially Women and Children."
According to Coptic Solidarity:
"The capture and disappearance of Coptic women and minor girls is a bane of the Coptic community in Egypt, yet little has been done to address this scourge by the Egyptian or foreign governments, NGOs, or international bodies. According to a priest in the Minya Governorate, at least 15 girls go missing every year in his area alone. His own daughter was nearly kidnapped had he not been able to intervene in time."

The report offers 13 separate case studies. Victims range from teenage girls, to newlywed and pregnant young women, to married women with children. Most of the victims disappeared in one of two ways: either they were publicly kidnapped, often by being forced into a car while traveling to school, church, or work; or -- especially true for teenage girls -- they were lured into relationships with young Muslim men who promised them the world, until, that is, they realized they had been duped. According to a former Egyptian human trafficker:
"One of the strategies they used to gain the girls' trust was for the kidnapper, a Muslim man, to tell the Christian girl he loved her and wanted to convert to Christianity for her. They would start a romantic relationship until, one day, they would decide to 'escape' together. What the girls do not know is that they are actually being kidnapped. Most of the time they will not marry their kidnapper, but someone else."
Nigeria’s burgeoning online casino market are attracting new players all the time - you can visit website details for more information.
The same former trafficker shared another story:
"I remember a Coptic Christian girl from a rich, well-known family in Minya. She was kidnapped by five Muslim men. They held her in a house, stripped her and filmed her naked. In the video, one of them also undressed. They threatened to make the video public if the girl wouldn't marry him."
He added:
"Salafist networks began in the seventies and it's reached its highest levels now, in the era of President Sisi... A group of kidnappers meets in a mosque to discuss potential victims. They keep a close eye on Christians' houses and monitor everything that's going on. On that basis, they weave a spider's web around the girls....
"The kidnappers receive large amounts of money. Police can help them in different ways, and when they do, they might also receive a part of the financial reward the kidnappers are paid by the Islamisation organisations. In some cases, police provide the kidnappers with drugs they seize.

The drugs are then given to the girls to weaken their resistance as they put them under pressure. I even know of cases in which police offered help to beat up the girls to make them recite the Islamic creed. And the value of the reward increases whenever the girl has a position. For example, when she is the daughter of a priest or comes from a well-known family....
"The Salafist group I knew rented apartments in different areas of Egypt to hide kidnapped Coptic. There, they put them under pressure and threaten them to convert to Islam. And once they reach the legal age, a specially arranged Islamic representative comes in to make the conversion official, issue a certificate and accordingly they change their ID....
"If all goes to plan, the girls are also forced into marriage with a strict Muslim. Their husbands don't love them, they just marry her to make her a Muslim. She will be hit and humiliated. And if she tries to escape, or convert back to her original religion, she will be killed.
According to the Coptic Solidarity report:
"The tactics include utilizing or planting Muslim female neighbors, colleagues, coworkers or friends to invite Coptic women to their home or travel across town during which time they are kidnapped by the groups who organized with the known female."
Unfortunately, "these networks are often supported by like-minded members (including high-ranking officials) of the police, national security and local administrations," adds the report.
"Their roles include refusal to lodge official complaints by the victims' families, falsifying police investigations, organizing the formal sessions of conversion to Islam at Al-Azhar, or harassing families into silence and acceptance of the de facto trafficking of their loved ones."
Why so many officials help in the abduction and forced conversion of Christian girls and women -- or at the very least look the other way -- "can be traced back to the second article of the Egyptian Constitution." Its states that "Islam is the religion of the State and Arabic is its official language. The principles of Islamic Sharia are the main source of legislation."
While there is no formal apostasy law in the Egyptian judiciary system, "as a matter of fact, it is prohibited for anyone wishing to convert away from Islam," the report notes. Meanwhile, "conversion to Islam is always accepted and encouraged" without any fuss. "Based on shari'a law," then, the "obvious problem for kidnapped Coptic women and girls who are forcibly converted is that they are nearly always denied the autonomy to choose their faith or to return to their faith once forcibly converted."

Such sharia stipulations undermine parental guidance of minors in other ways: Although Egyptian minors (aged 18 or under) cannot marry without parental consent, "a minor is allowed to formally convert to Islam, after which another (Muslim) custodian is assigned to approve a marriage. This effectively allows Muslim men to strip Copts of their parental rights and Coptic girls of their constitutional protections..."
"If an adult married woman converts to Islam, courts immediately annul her existing marriage (unless the husband agrees to convert likewise) and the woman becomes free to marry a Muslim man. (Needless to say, a vice versa scenario--a married Muslim woman trying to convert and marry a Coptic man--in no way invalidates her Muslim marriage.)"
Whenever asked or put on the spot about the abduction or disappearance of Christian girls, the government's response, to quote Laila Baha' Eldin, Assistant Foreign Minister for Human Rights of Egypt, is: "All reported cases of abduction had been investigated.... In most cases, it was about young women falling in love with someone from a different denomination."
As the report explains, however, "this defense... does not acknowledge or protect the ongoing rights of Coptic females":
"Regardless if a women is kidnapped from her home or in public, or if she agrees to elope and then discovers she has been tricked and wishes to leave, the elements of trafficking in persons and crimes against children are all still applicable. A woman in Egypt should have the right at any time to seek safety, have the right of movement, right of freedom of conscience and belief, and the right to change her views during her lifetime."
According to its mission statement, Coptic Solidarity works "to achieve equal citizenship for the Copts in Egypt." Since its establishment in 2010, Coptic Solidarity has been at the forefront of reporting and advocating for Egypt's trafficked Christian women and girls. In 2011, its president, Caroline Doss, testified at a Congressional hearing titled "Minority at Risk: Coptic Christians in Egypt" (broadcast by and available on C-SPAN)
Perhaps the most crucial paragraph of the Coptic Solidarity report is:
"The rampant trafficking of Coptic women and girls is a direct violation of their most basic rights to safety, freedom of movement, and freedom of conscience and belief. The crimes committed against these women must be urgently addressed by the Egyptian government, ending impunity for kidnappers, their accomplices, and police who refuse to perform their duties. Women who disappear and are never recovered must live an unimaginable nightmare.
The large majority of these women are never reunited with their families or friends because police response in Egypt is dismissive and corrupt. There are countless families who report that police have either been complicit in the kidnapping or at the very least bribed into silence. If there is any hope for Coptic women in Egypt to have a merely 'primitive' level of equality, these incidents of trafficking must cease, and the perpetrators must be held accountable by the judiciary."
What is happening in Egypt is just the tip of the iceberg.  An excess of 500,000 children are being trafficked every single day in North America. A child who is trafficked is sexually abused on average 5 to 15 times a day, and only 1% of these crimes are ever reported. This unimaginable darkness MUST BE STOPPED! Right now we want to invite you to join us in the fight to end child sex trafficking. "Silent Cry - The Darker Side Of Trafficking" is the newest documentary DVD put out by Josh Peck that will educate and motivate you to take action so you can protect your loved ones.  You will be shocked at how at how common this problem is in our country and after watching this you will never be the same.  Learn more about the DVD here.