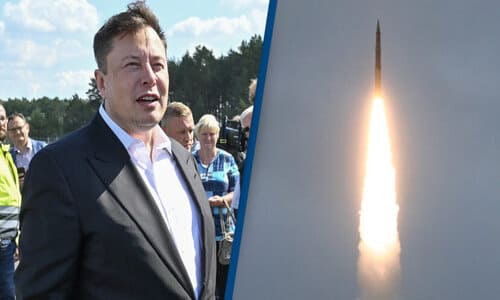 By Elias Marat/Activist Post October 12, 2020
Share this article:
Multibillionaire entrepreneur Elon Musk is quickly moving toward becoming a real-life Tony Stark after his aerospace corporation SpaceX signed a deal with the Pentagon to build a rocket capable of delivering up to 80 tons of war cargo anywhere in the world, in only one hour.
The new deal could revolutionize war logistics and would be capable to transporting weapons anywhere around the world 15 times faster than the current gold standard in large military transport aircraft, the Boeing C-17 Globemaster III, reports Business Insider.

For example, the 7,652-mile journey from Florida to Afghanistan would only take an hour using the proposed high-speed rocket, which travels at 7,500 mph.
The C-17 Globemaster, however, would take 15 hours to complete the journey, in addition to being an expensive aircraft that costs $218 million and has a maximum speed of 590 mph.
"Think about moving the equivalent of a C-17 payload anywhere on the globe in less than an hour," said Gen. Stephen Lyons of U.S. Transportation Command at a Wednesday conference.
"I can tell you SpaceX is moving very, very rapidly in this area. I'm really excited about the team that's working with SpaceX," he added.

While SpaceX was originally devised as a means to pursue the colonization of Mars and revolutionize space transportation while drastically cutting the costs of space travel, SpaceX has also been eager to team up with the Pentagon to augment and secure U.S. empire and military hegemony across the globe.
Just this week, SpaceX won a $149 million contract with the U.S. military's Space Development Agency to manufacture four new missile-tracking satellites that will be fitted with wide-angle infrared missile-tracking sensors.
The U.S. Army has also worked with SpaceX to develop new military navigation networks relying on the company's Starlink broadband satellites.

In August, the company also won 40 percent of a billion-dollar Pentagon contract to launch new rockets for the U.S. Space Force, with the remaining 60 percent going to the United Launch Alliance, a joint venture of Lockheed Martin and Boeing's space divisions.
The new concept for transporting war cargo using rockets vaguely resembles Musk's concept for passenger space travel that he proposed in 2017, which involved firing passengers into space before they quickly landed at their terrestrial destination point. In this case, however, the plan involves weapons rather than people.
Since the 1990s, there has been an intensified race to develop and deploy weapons platforms and "dual use" military hardware in space in a sort of post-Cold War sequel to the 20th-century arms and space races that began in the '60s with the debut of Sputnik and Echo, which were the first communication satellites launched by the Soviet Union and United States, respectively.
Originally published at Activist Post - reposted with permission.