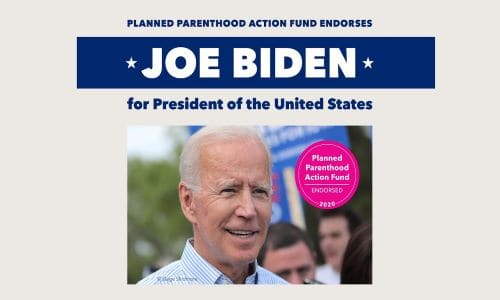 By Tony Perkins/Family Research Council January 21, 2021
Share this article:
It's been a long time since Planned Parenthood had such a good friend in the White House. And CEO Alexis McGill Johnson is making sure they cash in on every moment.
On the eve of Joe Biden's swearing in, the head of America's biggest abortion business said, "We have a ton of work to do to undo the harm over the last four years, but knowing we have champions there who understand what needs to happen in the first 100 days is tremendously exciting," she told NBC News.
"We are ready to hit the ground running on Day 1," she has insisted, pointing out that filling key posts with abortion extremists is one of the group's biggest goals.

So far so good, based on Biden's picks -- not the least of whom is his vice president. Kamala Harris, as even Newsweek has noted, is to the Left of even Bernie Sanders, voting -- not once, but twice -- to destroy babies born alive.
On abortion, Harris has voted against every pro-life piece of legislation she could, including bills with bipartisan support.
Last year she voted against the Pain-Capable Unborn Child Act, which would have protected unborn babies from abortion procedures after the point at which they can feel pain (20 weeks).
Harris also voted against the Born-Alive Abortion Survivors Protection Act, which would have required doctors present during a failed abortion -- an abortion that results in the birth of a living infant -- to provide the same level of care that would be offered to any other baby at the same stage of development.
Harris voted against Pain-Capable in 2018 and Born Alive in 2019 as well. She also voted against the No Taxpayer Funding for Abortion and Abortion Insurance Full Disclosure Act that would have codified the Hyde Amendment and prohibited abortion coverage in Obamacare.
Harris is also an original co-sponsor of the Global HER Act, which would permanently repeal the Mexico City Policy.

In her brief run for president, she campaigned on a series of extreme anti-life positions, including codifying Roe v. Wade into law, requiring preclearance for state abortion laws, repealing the Hyde Amendment, repealing the Mexico City Policy, preserving federal funding for Planned Parenthood and banning abstinence-only sex education.
During Harris' tenure as attorney general, David Daleiden and the Center for Medical Progress released undercover videos that exposed Planned Parenthood for the illegal sale of aborted fetal tissue.
Rather than prosecute Planned Parenthood, Harris raided the home of Daleiden, confiscating his hard drive because he had investigated Planned Parenthood, a donor to Harris' political campaign.
Harris also attacked the religious beliefs of recent nominees to the federal judiciary.
In 2018, during the confirmation hearing for Brian Buescher, Harris implied the nominee's membership in the Knights of Columbus, a Catholic charitable organization, precluded him from serving on the federal bench.
Asking about the Knights' views on abortion and marriage, Harris suggested that opposition to abortion and support for a biblical understanding of marriage disqualified Buescher from serving on a district court.

Worth noting is that during her tenure in the Senate, Harris has a lifetime 0 percent rating from the Family Research Council and a 100 percent record with Planned Parenthood.
Now, the focus turns to other vacancies, where the most radical pro-abortion administration in history can solidify its deadly goals. "We know that personnel is policy," Johnson said. "So we're making sure that those positions are filled with sexual and reproductive health champions."
Another way they plan to force Biden's hand is with their "Blueprint for Sexual and Reproductive Health, Rights and Justice," where they spell out "first priorities" that would roll back President Trump's pro-life accomplishments.
Together with other groups, Planned Parenthood demands immediate action that shows Biden's commitment to abortion-on-demand. Of course, Joe Biden (who NBC was careful to label as a "devout Catholic") seems more than willing to comply -- making several controversial picks to lead Health and Human Services (HHS), among other things.
The reality is, whether you like Donald Trump or not - his administration did more to protect the unborn in America and around the world than any president in U.S. history.
Originally published at Family Research Council - reposted with permission.