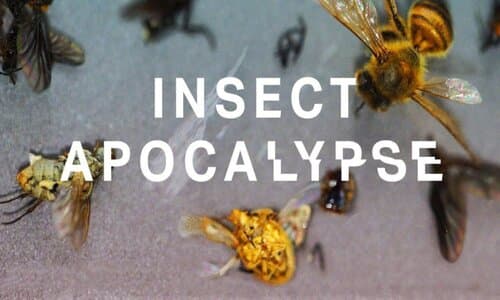 By Michael Snyder/Economic Collapse Blog February 26, 2021
Share this article:
It isn't just the economy that is collapsing.  We live at a time when our entire planet and all of the systems that it supports are in the process of failing.
There are many out there that believe that if we can just reduce global temperatures a bit that everything will be just fine, but that is a complete and utter fantasy.
The truth is that everything is collapsing because of our self-destructive behavior, and we won't be altering that self-destructive behavior any time soon.  There are others that are in a state of denial about what is happening, and they continue to promote the fairytale that everything is going to be just wonderful and that a new golden era of prosperity for humanity is right around the corner.
You have to be quite delusional to believe that sort of a narrative, but there are plenty of people that do.

At this juncture, everyone should be able to see that the clock is ticking for our planet, and in this article I am going to share several examples that underscore this point.
First of all, according to a new report that was just released this week, one-third of all freshwater fish species on the entire planet are now facing extinction...
Nearly a third of all freshwater fish species are threatened by extinction, according to a new report released by 16 conservation groups on Tuesday.
"The World's Forgotten Fishes" says that 80 freshwater species -- which make up more than half of all the world's species -- have already been declared extinct, with 16 disappearing in 2020 alone.
We are losing more than one species of freshwater fish a month.
That is mind blowing.
In other cases, certain populations of freshwater fish have suffered "catastrophic" population drops...
Migratory populations have declined by more than three-quarters since the 1970s, while populations of larger species, weighing more than 60 pounds, have fallen by an even more "catastrophic" 94 percent, it said.
If you think that this has happened because global temperatures may have ticked up a bit, you aren't being rational.
Temperatures have gone up and down dramatically for thousands of years, but we have never seen anything like this.

This crisis is getting worse with each passing year, and hundreds of millions of people rely on freshwater fish for "their main source of protein"...
About 200 million people across Asia, Africa and South America rely on freshwater fishers for their main source of protein, researchers said in "The World's Forgotten Fishes" report. About one-third of those people also rely on them for their jobs and livelihoods.
This is yet another factor that is going to cause the coming "global famine" that I keep talking about.
Meanwhile, we are losing insect species at a staggering rate as well.
In fact, one report found that a whopping 40 percent of all insect species are on the verge of extinction...
In February, they published the first synthesis of 73 studies on entomological fauna around the world over the past 40 years, listing places from Costa Rica to southern France.
They calculated that over 40 percent of insect species are threatened with extinction, and each year about one percent is added to the list.
This is equivalent, they noted, to "the most massive extinction episode" since the dinosaurs disappeared.
Reducing temperatures slightly won't alter this trajectory.
The truth is that this also is happening due to our extremely self-destructive behavior.
According to Australian researcher Francisco Sanchez-Bayo, we are looking at only about 100 years before all the insects are gone...
Chillingly, the total mass of insects is falling by 2.5 percent annually, the review's authors said. If the decline continues at this rate, insects could be wiped off the face of the Earth within a century.
"It is very rapid. In 10 years you will have a quarter less, in 50 years only half left and in 100 years you will have none," study co-author Francisco Sánchez-Bayo, an environmental biologist at the University of Sydney, Australia, told The Guardian.
Once all of the insects are gone, humanity will soon follow.
So this is something that we cannot afford to ignore.

On top of everything else, a few years ago one study determined that the number of wild animals living on the planet would drop by a total of 67 percent during the 50 year period from 1970 to 2020...
The number of wild animals living on Earth is set to fall by two-thirds by 2020, according to a new report, part of a mass extinction that is destroying the natural world upon which humanity depends.
The analysis, the most comprehensive to date, indicates that animal populations plummeted by 58% between 1970 and 2012, with losses on track to reach 67% by 2020. Researchers from WWF and the Zoological Society of London compiled the report from scientific data and found that the destruction of wild habitats, hunting and pollution were to blame.
Can anyone rationally explain why we aren't supposed to be totally freaked out by numbers like this?
Even the human race itself is in decline.
As I discussed a couple days ago, male sperm counts have dropped by more than 50 percent since 1973.  We have almost reached a point where the average human male is in a sperm count range that makes it difficult to have children, and this problem continues to intensify with each passing year.  For much more on this, please see my previous article entitled "Science Proves That Time Is Running Out For Humanity".
The decline in human fertility has been particularly dramatic in the western world, and birth rates in some western nations have already dropped below replacement level.
In addition, scientific research has shown that humans are getting shorter, weaker, slower and our brains are getting smaller.
We like to think of ourselves as the pinnacle of human history, but the truth is that we are actually a bunch of mutant degenerates.  Each generation produces more harmful mutations, and those harmful mutations are passed on to the next generation of humans.
So not only is the clock ticking for our planet, but it is also ticking for humanity itself.
Those that are trying to convince you that the human race is about to enter a new "golden age" are not telling you the truth.
Time is running out, and global events are building up to a grand crescendo.
Unfortunately, most people can't see the big picture because they are being willingly deceived by liars that are telling them whatever they want to hear.
Originally published at The Economic Collapse Blog - reposted with permission.