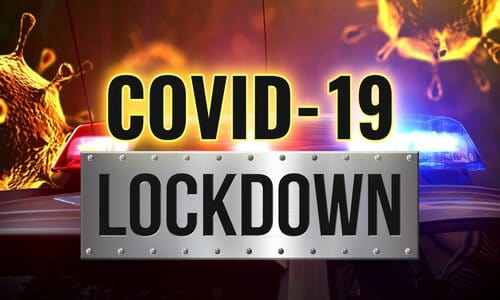 By Michael Snyder/End of the American Dream August 02, 2021
Share this article:
For most of the first half of 2021, the vast majority of Americans believed that the COVID pandemic was nearly over.  But now the Delta variant has changed everything.  We are being told that the number of confirmed cases is absolutely skyrocketing, and new mandates and restrictions are now being instituted all over the nation.
If the number of newly confirmed cases each day continues to rise, could we also see a return of widespread lockdowns and school closings?
Such a notion would have been unimaginable just a few weeks ago, but now the Biden administration is openly admitting that it is a possibility...
White House principal deputy press secretary Karine Jean-Pierre said Thursday that the Biden administration will continue to "listen to the scientists" when it comes to potential future lockdowns and school closures.

And as he was leaving for Camp David on Friday, Joe Biden made another comment which has a lot of people wondering what is coming next...
President Joe Biden signaled the onset of more restrictions to stem the spread of COVID-19 as the highly contagious delta variant rips through the nation.
While departing for Camp David on Friday, the commander in chief shouted a response to a reporter who asked if people should expect tougher constraints than what's already been implemented.
"In all probability," he replied.
Of course Joe Biden does not have the authority to order lockdowns in every state.
Ultimately, it will be up to individual state governors to order new lockdowns, but if the Biden administration recommends lockdowns most of them will fall in line.
In addition, on Thursday Biden seemed to suggest that the idea of some sort of a nationwide vaccine mandate is being explored...
Asked about doing even more to get people vaccinated through mandates by states, localities, and businesses, Biden said he wants them to 'continue to move in that direction.'
He also didn't rule out the idea of a national mandate, though he wouldn't vouch for the authority. 'It's still a question of whether the federal government can mandate the whole country. I don't know that yet.'
Such a mandate would surely be challenged in court, but as CNN has explained, the Biden administration may not need to issue a nationwide mandate because so many private employers are now mandating the vaccine...
The CNN article, however, contends it may not even be necessary for the federal government to do something as radical as mandating the vaccine, suggesting it may become nearly impossible to participate in everyday life without one if employers, stores, and hospitals impose requirements one by one.

"The federal government may not try to force people to get the Covid vaccine," the report reads. "And it may not have to."
"Your employer, the restaurant where you want to eat, the concert venue you want to visit or the country where you want to travel may do it for them," it adds.
At this point, many of the biggest employers in America have already pulled the trigger.
Walmart is the largest employer in the country, and on Friday they announced a very strict new vaccine policy...
Walmart Chief Executive Doug McMillon said Friday the retailer's corporate staff as well as its management-level employees must be vaccinated against Covid-19 by Oct. 4, according to a memo obtained by CNBC.
The mandate applies to all home office associates, in addition to market, regional and divisional employees who work in multiple facilities, the nation's largest private employer said.
Disney also announced a very broad vaccine mandate on Friday...
The Walt Disney Company said Friday it is requiring all salaried and non-union hourly employees in the U.S. to be fully vaccinated against the coronavirus by the end of September.
Employees who are still working from home will be required to provide verification of vaccination prior to returning to any Disney sites, including theme parks and offices.
Many big tech companies are jumping on board as well.  For example, Facebook will be requiring "anyone coming to work" to be vaccinated...
Facebook will require U.S. workers returning to its offices to be vaccinated, the company said on Wednesday.
"As our offices reopen, we will be requiring anyone coming to work at any of our US campuses to be vaccinated," VP of People Lori Goler said in a statement.

Needless to say, people that refuse to take the vaccines will find their employment options increasingly limited in the months ahead.
Meanwhile we received some very interesting news about the Delta variant on Friday.  The following comes from CNBC...
About three-fourths of people infected in a Massachusetts Covid-19 outbreak were fully vaccinated against the coronavirus with four of them ending up in the hospital, according to new data published Friday by the Centers for Disease Control and Prevention.
The new data, published in the U.S. agency's Morbidity and Mortality Weekly Report, also found that fully vaccinated people who get infected carry as much of the virus in their nose as unvaccinated people, and could spread it to other individuals.
Sadly, these numbers from Massachusetts appear to fit very well with a pattern that is emerging nationwide.  The following comes from NBC News...
At least 125,000 fully vaccinated Americans have tested positive for Covid and 1,400 of those have died, according to data collected by NBC News.
Those numbers are really shocking.
So how bad will things get in the months ahead?
Many Americans had been hoping for a return to normalcy, but as I keep warning, our world is only going to get even weirder in the years ahead.
At this point, we have entered a chapter in our history when change is happening faster than ever before.
In particular, this pandemic has radically transformed our society in a very short period of time, and it has become clear that it isn't even close to being over.
Originally published at End Of The American Dream - reposted with permission.