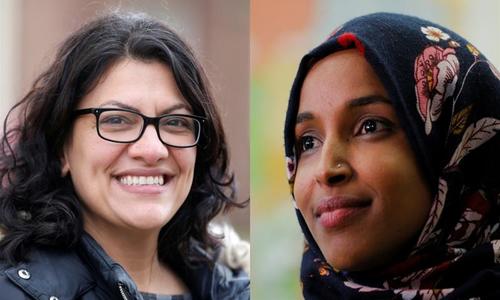 By Sharon Wrobel/Algemeiner.com August 16, 2021
Share this article:
US Representatives Rashida Tlaib (D-MI), Alexandria Ocasio-Cortez (D-NY) and five other Democrats have called for the US Treasury to stop granting tax exemptions to American charitable organizations active in the West Bank and eastern Jerusalem.
In a July 22 letter sent to Treasury Secretary Janet Yellen, the group expressed their "extreme concern that US charities are funding and providing direct support to Israeli organizations that are working to expand and perpetuate Israel's illegal settlement enterprise in violation of international law, including supporting the dispossession and forced displacement of Palestinians from occupied East Jerusalem neighborhoods."
"We are concerned that these policies violate US obligations under international law, as well as federal tax law," the letter read.

"Yellen must act to enforce US law and end these organizations' status," tweeted Tlaib, who signed the letter along with Democratic Reps. Ocasio-Cortez, Cori Bush (MO) André Carson (IN), Mark Pocan (WI), Ayanna Pressley (MA), and Betty McCollum (MN).
The group alleged that the groups' tax-exempt non-profit status amounts to an effective "subsidy" from the US government to fund "serious breaches of international law and violations of internationally recognized human rights related to the expansion of the illegal Israeli settlement enterprise."
The letter specifically listed the Central Fund of Israel (CFI) as among those groups it charged with "fueling the dispossession and displacement of Palestinians," as well as American Friends of Beit El.  Many Christian ministries actively support the work of Jewish communities in these areas and actions to limit their funding for supporting such work would have a big impact.

The lawmakers called for Yellen to commit to providing House Foreign Affairs Committee members with a list of American charities "operating directly or indirectly in any occupied territory," and to answer a series of questions by August 22.
Israel rejects the claim that it occupies the territories capture in the 1967 Six Day War. It views the West Bank as disputed and East Jerusalem, which it annexed, as part of its capital.
The US in 2019 revoked a State Department legal opinion that deemed settlements to be illegal. Pro-Israel groups have called on US President Joe Biden to reinstate the position supported by the Trump administration.
Originally published at Algemeiner.com - reposted with permission.