Lessons From Afghanistan - Regional Allies Trust In US Fades 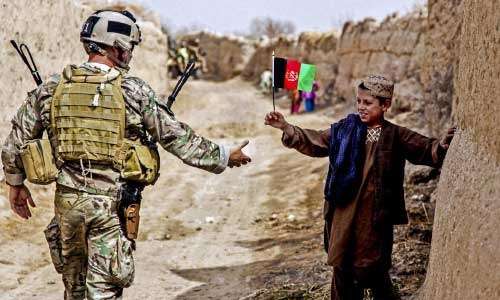 By Jonathan Tobin/JNS.org August 17, 2021
Share this article:
For those old enough to remember the images of the last days of South Vietnam, recent events in Afghanistan are shockingly familiar. In each case, a flawed American ally facing a determined foe quickly collapsed once both sides to the conflict realized that the United States wouldn't lift a finger to help its friends.
Afghanistan was America's longest war, and sadly, it must go down in history, like Vietnam, as one in which a superpower was defeated by a much weaker enemy. In both instances, there are good reasons to argue that defeat might have been inevitable despite the skill and bravery of the U.S. forces, and that of our allies, who fought there.
And in both cases, it's entirely likely that most Americans will--while blushing at the sight of despicable enemies gloating over their triumph, as well as the bloody consequences for those locals who fought with or helped us there--not care all that much. Our lives will go on undisturbed, even if troubling memories about Taliban rule will pop up on the 9/11 anniversary or when the oppression of women or other Islamist atrocities that will commence in Afghanistan are publicized.

That won't be the case for other American allies, including those like Israelis, who, thankfully, don't depend on the presence of U.S. troops to defend them against enemies. The United States may still be a country whose national defense is a function of oceans and continents.
But smaller countries that live in dangerous neighborhoods inhabited by those, like Hamas in the Gaza Strip and Hezbollah in Lebanon, where the victory of Islamists like the Taliban will indeed be celebrated, are, however, forced to draw harsh conclusions about their alliances with the United States and whether its government can be relied upon to keep its word when the chips are down.
The Vietnam analogy cannot be ignored.
By the time an armored offensive by the North Vietnamese Army (and not, as myth would have it, successful guerrilla fighters) swept into Saigon, the overwhelming majority of Americans were heartily sick of the Vietnam War. When a Democratic Congress overruled a Republican administration's desire to resupply the South Vietnamese, most shrugged and said, not unreasonably, that they had given enough in a war that didn't make them any safer.
They continued shrugging when the Communist victors put roughly a million of the losers in re-education camps and when hundreds of thousands of Vietnamese who hadn't been able to get on the last helicopters out of Saigon fled their homes in unsafe small boats hoping for a chance to get to freedom.
It will probably go even harder for the people of Afghanistan. But a broad, bipartisan consensus in favor of ending the "forever" war in that country will cause most Americans to avert their eyes without too much trouble.
After all, Americans have poured vast amounts of blood and treasure into Afghanistan, even if, thankfully, the casualty count was a fraction of what it was in Vietnam. They have every right to think that after 20 years they have sacrificed enough.

The denouement happened on President Joe Biden's watch as his feckless predictions that another Saigon wouldn't happen proved false, and the sense that the government that had lost control of events and, even worse, didn't really care pervaded even sympathetic coverage of his folly in the mainstream media.
But the blame for this debacle is bipartisan.
It starts with the George W. Bush administration. The United States had every right to invade in the fall of 2001. Yet Bush discounted the long history of catastrophes for foreign armies in Afghanistan dating back to Alexander the Great, and included the British and Soviet empires when he ordered U.S. troops to attack in retaliation for the Taliban's hosting of the Al-Qaeda terrorists that attacked America on 9/11.
The initial American success in routing the Taliban from power was heartening, but rather than leave the Afghanis to sort out their fate, U.S. and NATO forces felt impelled to stay and to begin a futile effort at nation-building.
Despite the positive impact that had on so many there, this was doomed to failure in a nation where many of the people had little interest in either democracy or the benefits of life in the 21st century, as opposed to the medieval Islam practiced by the Taliban.
President Barack Obama inherited a stable conflict in which the West arguably still had the upper hand. Democrats had campaigned in 2006 and 2008 on the idea that Afghanistan was the "good war" as opposed to the "bad" one being fought by Bush in Iraq. Still, his 2011 declaration that the United States intended to leave signaled to the Taliban that all they had to do was to wait it out until the Americans had enough and were gone.
That mistake was compounded by President Donald Trump, who engaged in pointless negotiations with the Taliban in order to try to make good on his promise to "end" a war in which the other side was determined to keep fighting until victory. Trump set in motion a plan for withdrawal that also encouraged the Taliban and helped guide their final offensives.
Nevertheless, he vigorously pursued a victorious campaign against ISIS terrorists in Iraq and Syria that Obama had flubbed, coupled with a tough stance against Iran. That at least held open the possibility that--if push came to shove, as it did this month--he might not ignore a situation in which American allies in Kabul were endangered or overwhelmed.

Not so with Biden, who, given his supposedly superior command of foreign policy, could still have overturned Trump's Afghanistan plans, as he did his predecessor's policies on Iran and other issues. His administration was unprepared for the crisis and failed to respond effectively, even to the point where Americans and those who had served our cause were left behind in the final rush to flee Kabul.
The imagery of a president and his spokesperson on vacation and unavailable for comment as an ally fell to a sworn foe of America and the West will linger in the world's memory of these events.
What's more, the problem isn't merely a question of the failures of Biden and the three presidents who came before him. As was the case after Vietnam, there needs to be a reckoning within the military and intelligence establishment in Washington. As much as their political masters, they were the architects of this disaster and need to be held accountable with respect to the strategies they pursued and their inability to properly evaluate events right up until the final disaster.
That is something that, sooner or later, Americans will attend to, as they've done before after other failures.
Israelis, on the other hand, must reckon with the immediate consequences for the Middle East. American allies must rightly wonder how they can possibly rely on a government like the one led by Biden as threats from other Islamists--like the regime in Iran, and its allies and auxiliaries--continue to grow stronger.
The administration will point out that Israel and even the Gulf states and other Arab nations, which have good reason to feel slighted by Biden, are in a very different position than Afghanistan. That's true, but as the president continues to engage in an effort to renew Obama's appeasement of Iran, how can he possibly ask any of America's allies to trust him to take their security into account when negotiating with the theocrats of Tehran?
While there is still time to reverse course, at the moment, Washington is giving every indication that it is a declining world power drifting into an incoherent and ineffective stance against Iran's terrorist threats and nuclear ambitions, as it has done in Afghanistan.
That leaves Israel and its Arab allies more dependent on each other than ever. And it must force them to think of the necessity of both acting on their own without the United States, as well as to consider reaching out to other powers like Russia and China even though their intentions are far from benevolent and cannot be trusted.
This creates a formula for a far more dangerous world than it would be if the United States were led by people who understood the dangers and were focused on protecting U.S. interests, rather than pursuing illusory goals rooted in ideology rather than realpolitik. A willingness to take responsibility for this failure--something that Biden clearly refuses to do--would be a start. Some believed that starting in January, the "adults" were back in power and that as a result, the world would be safer. If only that were true.
A former Israeli ambassador sounded a warning in the wake of the Taliban's lightning takeover of Afghanistan, saying it shows that Israel must rely on itself for its own defense.
The former Israeli ambassador to Azerbaijan, South Africa, Lesotho, and Swaziland -- tweeted, "The USA is our closest ally. They have been there for Israel time & again over the years. But the horrific events in Afghanistan must be a hard, scary lesson about changing interests & cold, hard calculations."
"Dangerously, in 2021, self-reliance is more important than ever," he said.
"But self-reliance doesn't mean do whatever you want," Lenk continued. "Doesn't mean Israel is alone and friendless. Need to protect partnerships, relationships, alliances and reputation."
"But have to have a plan for a rainy day when all of the above might fail," he asserted.
Originally published at JNS.org - reposted with permission.