Taliban To Afghan Christians: We Know Who You Are, And We're Coming For You 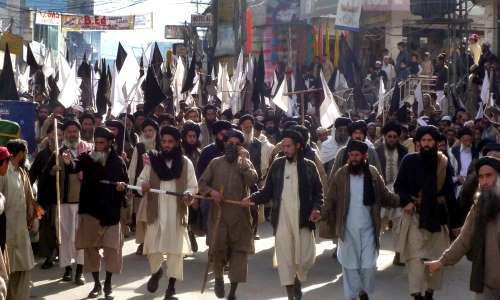 By Jonathon Van Maren/Bridgehead.ca August 17, 2021
Share this article:
The images pouring out of Afghanistan right now via social media as Kabul falls to the Taliban are simply horrifying. Hundreds of people flooding the airport in Kabul, desperate to escape. Men who were clinging to the landing gear of a U.S. Airforce plane falling to their death as it took off in a scene gut-wrenchingly reminiscent of people plummeting from the burning Twin Towers.
The wild-eyed looks of terror on those left behind, many of whom had worked with coalition forces for years and knew they were about to pay for it with their lives--and that there would likely be no rescue.
I don't have any unique or insightful take on the withdrawal from Afghanistan and whether it was strategically necessary--although surely it didn't have to come to this. Surely allies could have been evacuated and rescued and not left to die.

But the historic scenes we are witnessing right now are destined to be iconic, and this human tragedy with a thousand faces looks and feels like the end of an era. According to Mark Steyn, once a staunch advocate of the War on Terror, we are watching America's Suez moment unfold live on the Internet.
It was all so different in October of 2001, when despite the fresh horror of 9/11 America seemed as if she was at the height of her strength. The American war machine pounded Afghanistan with the grief and righteous rage of a wounded superpower, and the live footage was an awe-inspiring thing to behold.
In those first days, the new conflict seemed to snap things back into focus for a moment, bringing us back to the clarity we'd lost with the end of the Cold War. They were the bad guys. We were the good guys. Civilization was fighting barbarism again. All was right with the world.
I followed it all obsessively, cutting out articles and putting them in an album to track the War on Terror as coalition forces from over forty countries cut drove the Taliban into their caves. I remember one photo essay in TIME that affected me deeply, of a handful of Northern Alliance troops beating a wounded Taliban fighter, shoving him onto the road, and emptying a Kalashnikov into his chest.
Queasiness with the realities of war, however, were easily neutralized by the nationalist machismo that accompanied it. Country singers contributed catchy anthems that everyone listened to: Toby Keith alone had "The Taliban song," "American Soldier," and "Courtesy of the Red, White, and Blue." (Listened to with hindsight, these songs are truly bitter historical artifacts.)
I know quite a few guys who served in Afghanistan. One friend who did a tour brought me an Iraqi banknote with Saddam's face on it that he'd gotten from an American who'd served first in Iraq, the second front in the War on Terror. After Remembrance Day parades on November 11, I sometimes joined them at the Legion Hall, where soldiers would end up drinking beers and reminiscing.

There was always a photo or two of young men killed in action set up on the tables, and their buddies would put beers in front of them, masking their grief with booze and bitter jokes. On one of these afternoons, a solider went missing and his buddies realized he'd gone alone to the cemetery to visit one of the fallen. "We're going to the grave! Who's coming?" someone bellowed, and there was a mass rush to the exit.
And what was all of their sacrifice for? The deaths, the PTSD, the missing limbs, the untold scores of suicides? In a brutal, bitter column, one veteran of the Afghan conflict says it meant nothing at all--and that all she feels is grim relief as the world faces what many veterans already knew to be true.
But the fact is that these hellish scenes of desperation do mean something. To an Afghan schoolgirl, Mark Steyn wrote recently, this is about the fall of Kabul. But for everyone else--for NATO nations, for China, for Iran, for allies and enemies--this is about the fall of America.
Can you imagine being a citizen of Taiwan and watching this unfold live on Twitter right now? Watching the terrified Afghans flee from the incoming tyrants reminds them that Communist China is coming for them as surely as they came for Hong Kong, and that when they do, there will be nobody to save them. The cavalry will not arrive. The age of American Empire is over. Nation-building may well be an exercise in futility.
But the fact remains that for millions of people around the world, the realization will be setting in that they are truly alone.
As Mark Steyn mused grimly:
But don't for a moment think this is just some rushed, bungled, memo-incinerating abandonment of the US embassy. State Department diplomats have been preparing this move all summer, under cover of a highly sophisticated deflection operation on their Kabul Twitter feed:
The month of June is recognized as (LGBTI) Pride Month. The United States respects the dignity & equality of LGBTI people & celebrates their contributions to the society. We remain committed to supporting civil rights of minorities, including LGBTI persons. #Pride2021 #PrideMonth
I do hope they've managed to evacuate the embassy's LGBTQWERTY flag before the sacking commences.
America is not "too big to fail": It's failing by almost every metric right now. The world-record brokey-brokey-brokeness manifested by the current spending bills is only possible because the US dollar is the global currency. When that ends, we're Weimar with smartphones. Clearly, Chairman Xi and his allies occasionally muse on the best moment to yank the dollar out from under...A decade or so back, I quoted Bernard Lewis:
I was on a panel with the great Bernard Lewis a couple of years ago - actually six or seven years ago - and Bernard said that the danger here is that America risks being seen as harmless as an enemy, and treacherous as a friend... It's a very dangerous lesson to teach the planet.
"Harmless as an enemy, and treacherous as a friend": a devastating indictment, and entirely correct. But it neglects the ultimate reality: the bungling superpower can inflict defeat only on itself.

Meanwhile, it is the Afghans who will suffer the most, long after we've all moved on. Brother Samuel, a field director for Open Doors, an organization working with persecuted Christians around the world, warned that dark times are coming under Taliban rule.
"Secret believers in Afghanistan are especially vulnerable," he said. "Prior to Taliban rule, they already had a very difficult time living out their faith, as they had to keep it secret from their families for fear of being shunned, or worse, killed. Now that the Taliban is in power, their vulnerability increases tenfold. It would be almost impossible to be a follower of Jesus in this country. We are monitoring the situation, but this is the time for us to ask God to have mercy not only on His people but on this country as a whole."
One observer says that a church leader in Kabul has already said that the Taliban is sending letters to house churches warning them: "We know who you are, and we're coming for you." Release International is warning that persecution against Christians in Afghanistan under Taliban rule is likely.
Leaders like Canada's Trudeau had promised to rescue thousands of vulnerable Afghans, including religious minorities, but a recent report indicates that the Canadian military has been waiting for a go-ahead from the Prime Minister's Office for days--but that Trudeau and his team are instead focused on the snap election they called in an attempt to regain their parliamentary majority.
Again, I'm no expert, and so I have no idea if withdrawal was necessary or not. The experts don't seem to know, either--they promised that it would take the Taliban months to reach the capital. (At The American Conservative, Rod Dreher has been publishing scathing condemnations of the American military elites nonstop.) Most seem to agree that the exit has obviously been catastrophic, regardless of your views on the withdrawal.
But watching the videos of Afghans racing for the airport, I thought of a 2013 event I attended with Afghan-American author Khaled Hosseini, author of novels like The Kite Runner and A Thousand Splendid Suns, where he spoke in glowing terms about the future that was being built in Afghanistan and the opportunities now available to his countrymen--and countrywomen. That is all ending, today, as I write this.
Mistakes had been made, Hosseini said, but what had been done there had been worth doing. Today, he is "shocked" and "nauseated" as the Taliban remerges. His novels are filled with tragedy and also hope--a nation emerging from the darkness. It turns out that freedom was only a brief interlude. I wonder if he has any novels left in him.
Originally published at The Bridgehead - reposted with permission.