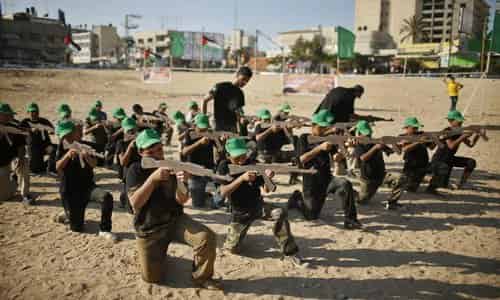 By Lea Speyer/Algemeiner.com July 21, 2016
Share this article:
While children around the world spend their summer vacation at camp or enjoying time at the beach, the youth of Gaza are being prepped for war with Israel.

In a propaganda video released this week by Hamas's military wing -- the Izz Al-Din Al-Qassam Brigades -- and translated by the Middle East Media Research Institute (MEMRI), children are seen partaking in military drills and radical indoctrination against Israel while attending the "Vanguards of Liberation: Soldiers of Jerusalem" camp.
The children are trained by mujahideen -- or jihadist soldiers -- in "various skills," such as hand-to-hand combat, military drills -- many of which feature the desecration of the Israeli flag -- and weapons training.
"We are in need of strong and powerful heroes in order to implement the words of Allah: '(The companions) are tough against the infidels and merciful among themselves,'" a masked counselor is heard saying.
"We concentrate on motivational instruction and religious education, through lectures in which we motivate the students, to wage jihad, for the sake of Allah, and we instill love for Allah and His Prophet in the souls of our sons."
According to an unnamed camp official, the camp focuses on "providing a sound religious and ideological education, in order to build an able and unique generation of powerful servants of Allah, in an ideological, religious and military sense, a generation that will liberate Jerusalem and the rest of the land, Allah willing."
Posters of suicide bombers line the camp, to serve as an inspiration for the Gazan youth. A second unnamed camp official said the images are of those "who sacrificed their souls as martyrs in jihad for the sake of Allah, leaders who will be their role models, on the path to liberation and martyrdom...without fear, with force and steadfastness."

In an interview, one youth said he and his fellow terror-campers "come from the Mosques in order to heed the call of Allah and His Prophet, in order to prepare ourselves for the final and decisive battle with the tyrannical occupation that defiled our land and our holy places."
"We came here today to undergo training with all our strength and our knowledge, in order to protect our holy places and our land, and in order to take revenge upon the tyrannical Zionist occupation," he said.
The youth's comments reflect what has become a major theme promoted by Palestinian leaders while inciting to violence against Israel.
In speeches and other forms of propaganda, Palestinians are called upon to rise up in defense of Muslim holy places -- particularly the Al-Aqsa Mosque that sits on the Temple Mount -- from Israel.
Over the course of the summer, Hamas will run 25 different summer camps throughout Gaza, which will be attended by some 50,000 children.
Originally published at Algemeiner.com - reposted with permission.