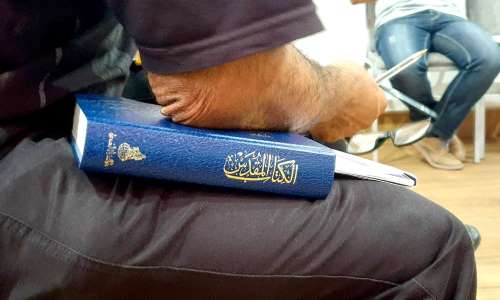 By Open Doors Ministries October 11, 2022
Share this article: John* arrived at the airport late in the evening. There was only one more hurdle to get through before he was safely with his contacts, secret Christians who were following Jesus in this Middle Eastern country we can't name.

He had to make it through the border.

He went to the customs line at about 9:30 p.m. His hope was the customs officers wouldn't ask to see inside John's suitcase; he hoped they would just wave him through.

That's not what happened.

A customs official asked John to open his suitcase. "I opened the suitcase," John recalls. "The man opened several of my special 'presents' and asked me who these presents were for or where I wanted to sell them. I told him that I personally wanted to give these presents to thank the people for being welcome in the country."

The "presents" were, of course, Bibles. John is a Bible smuggler. And he'd just been caught trying to bring God's Word into a place where it wasn't welcome.

Getting God's Word in--no matter what

Smuggling Bibles has been part of Open Doors' ministry since the very beginning. Open Doors' founder Brother Andrew and his fledgling team regularly smuggled Bibles behind the Iron Curtain--it's where Brother Andrew's nickname, "God's Smuggler," came from. In places where the Bible is still hard to come by, smuggling is still part of what we do.

John is an Open Doors partner who had volunteered to bring God's Word to secret believers desperate for Bibles. Brother Andrew used to pray that "seeing eyes would be blinded" as he snuck Bibles through unfriendly borders. John probably prayed something similar to that. But God doesn't always answer prayers in the same way.

The customs officers confiscated all 50 Bibles that John had tried to sneak in his suitcase. John was taken to a police station where he was held and interrogated through the night. "I was questioned by customs officers and local policemen," John says. "Continuously there was someone questioning me, without a break. Some were in uniform, others not. They asked me about my material, who it was for or to whom I wanted to sell it. I repeated that these were presents." The guards knew there were too many Bibles to be simple gifts.

John wasn't sure what would happen to him. He asked one of the officials if he could go to his hotel. The official told John that John would instead be put on the first airplane back to his country--he was to be deported.

But the official continued. "The man said that I was different from the others," John says. "I started to talk with him. [After a while,] he told me his father was seriously ill."

John didn't hesitate; he asked if he could pray for the officer's father.

"He agreed and I prayed for the man," John says. "After that, I told him my testimony and explained how important Jesus is to me. I took a small New Testament from my pocket. At the end of the book, a 'plan of Salvation' was printed."

John read all this for the man. And incredibly, the official who was overseeing John's arrest came to see the truth of Jesus.

"He accepted Jesus as his Savior," John says. "I had tears in my eyes."

The officer then offered to help John. "He said that he would help me to solve my problem," John remembers. "He asked me if I was only in the cell because of the books. I said 'yes.' He then asked if I wanted the books back. The man asked me to follow him to get the Bibles. The situation was solved, and I could put the books back in my suitcase. At about 8:00 a.m. he took me to my airplane."

God was with John, all the time.

"From the time my suitcase was opened until I entered the airplane again, I thanked the Lord," he says. "I had peace--the peace of God that transcends all understanding. I saw the hand of God in all that happened. It went different than I had planned. He decided to change everything for this one soul. I was just a spectator. Thanks to my Father, thank You, Jesus."

Secret Christians in places like the Middle East often feel like they are isolated--especially when they lack access to things like Bibles. But they aren't alone; they have a global family in the Church! When you give a gift today, you remind them of that, and encourage them to continue standing strong for Christ. Will you help?

Another group of travelers was more successful in delivering Bibles and other books.

"We traveled with half our suitcase full of Arab Bibles," one member of a small group of Europeans says. "We had a good trip to the country. The airplane landed with an hour delay, but we arrived at the address where we would stay.

"The next day, we called our contact person--'M' we'll call him. Soon, he picked us up and we headed with our valuable 'presents' to his church. We had an hour [together] before handing over the Bibles and so we spent some time in prayer with M. It was a moving and very rich time together."

Later, they participated in a church service.

"It was moving to be part of a church service with about 80 believers, all coming from a Muslim background," the Bible smuggler says. "There were also some children present."

Colin*, one of the Open Doors staff who oversees these smuggling trips says, "I thank God that most of our Bible-smuggling trips work out well. Often, the travelers give testimonies after their travel about how God protected the special luggage they were carrying."

The literature is more than welcome in the Middle East. "Having Bibles, Christian books and discipleship material is crucial for a growing church with new believers," Colin says.

A church leader in one of these places echoes this. "We are grateful for the Christian literature we regularly receive," he says. "Thank you that you help us."

$35 provides 5 Bibles to suffering Christians along with the training materials needed to use God's Word effectively to grow, worship and endure persecution.

Open Doors is not just shipping books overseas, we are delivering Bibles into the hands of persecuted Christians who need them most. We are also teaching them how to build their lives on the truth of God's Word so that their faith should not fail.

*Throughout, names have been changed in order to protect identities.