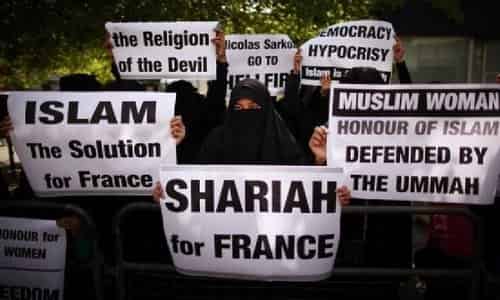 By Yves Mamou/Gatestone Institute October 04, 2016
Share this article:
Recently, two important studies about French Muslims were released in France. The first one, optimistically entitled, "A French Islam is Possible," was published under the auspices of Institut Montaigne, an independent French think tank.
The second study, entitled, "Work, the Company and the Religious Question," is the fourth annual joint study between the Randstad Institute (a recruiting company) and the Observatory of Religious Experience at Work (Observatoire du fait religieux en entreprise, OFRE), a research company.
Both studies, filling a huge knowledge-deficit on religious and ethnic demography, were widely reported in the media. France is a country well-equipped with demographers, scholars, professors and research institutes, but any official data or statistics based on race, origin or religion are prohibited by law.

When Islamists sue their employer, jurisprudence shows that the accusation is always based on "racism", and "discrimination" -- charges that can only make employers regret having hired them in the first place.
Sources of conflict listed include proselytizing (6%), and refusing to perform tasks (6%) -- for instance, a delivery man declining to deliver alcohol to customers; refusing to work with a woman or under the direction of a woman (5%), and requesting to work only with Muslims (1%). These cases are concentrated in business sectors "such as automotive suppliers, construction, waste processing, supermarkets... and are located in peri-urban regions."
Conclusions
The French model of assimilation is over. As noted, it worked for everyone except French Muslims; and public schools seem unable today to transmit republican values, especially among young Muslims. According to Hakim el Karoui:
"Muslims of France are living in the heart of multiple crises. Syria, of course, which shakes the spirit. But also the transformation of Arab societies where women take a new place: female students outnumber male students, girls are better educated than their fathers. Religion, in its authoritarian version, is a weapon of reaction against these evolutions. .... And finally, there is the social crisis: Muslims, two-thirds of child laborers and employees, are the first victims of deindustrialization."
Islamization is growing everywhere. In city centers, most Arab women wear a veil, and in the suburbs, burqas and niqabs are increasingly common. At work, where non-religious behavior was usually the rule, managers try to learn how to deal with Islamist demands.
In big corporations, such as Orange (telecom), a "director of diversity" was appointed to manage demands and conflicts. In small companies, managers are in disarray. Conflicts and litigation are escalating.
Silence of the politicians. Despite the wide media coverage around these two studies, an astounding silence was the only thing heard from politicians.
This is disturbing because Institut Montaigne's study also included some proposals to build an "Islam of France," such as putting an end to foreign funding of mosques, and local training religious and civil leaders.
Other ideas, such as teaching Arabic in secular schools "to prevent parents from sending their children in Koranic schools" are quite strange because they would perpetuate the failed strategy of integrating Islamism through institutions.
Young French Muslims, even those born in France, have difficulty speaking and writing proper French. That is why they need to speak and write French correctly before anything else.
These two studies, although a start, are staggeringly insufficient. Politicians, journalists, and every citizen needs to learn more about Islam, its tenets and its goals in the country.
It is unbelievable that the only tools at our disposal are inadequate opinion polls. Without knowledge, no political action -- or any other action -- is possible. It is a situation that immeasurably benefits aggressive political Islamists.
Without more knowledge, the denial of Islamization, and an immobility in addressing it, will continue. Willful blindness is the mother of the civil war to come -- unless the people and their politicians choose to submit to Islam without a fight.
Originally published at Gatestone Institute - reposted with permission.