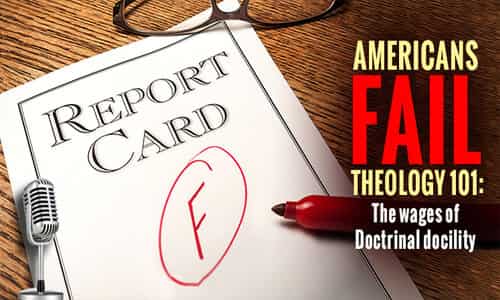 By Eric Metaxas/Breakpoint.org October 11, 2016
Share this article:
One thing is certain: Americans love the Bible. A recent report from The American Bible Society and Barna Group finds that two-thirds of the nation believe the Bible contains "everything a person needs to know in order to live a meaningful life."
And a vast majority of folks in this country still consider themselves Christians. But just how deep does their Christianity run?
Not very, according to the results of a survey released late last month by LifeWay Research. The survey, commissioned by Ligonier Ministries, asked 3,000 participants a set of 47 questions about foundational Christian beliefs.

Many of the answers revealed a mishmash of heresy and confusion about Christianity's most basic doctrines.
Seventy percent of Americans agree there's only one true God--one in essence, three in person: Father, Son and Holy Spirit. Yet almost the same number believe God accepts the worship of all other religions, even those that deny the Trinity or worship other deities.
Sixty-one percent correctly say Jesus is both human and divine, but half think that He's also "the first and greatest being created by God," rather than existing eternally, as Scripture and the ancient creeds of the faith teach.
More bizarre contradictions emerged: Over sixty percent of Americans say that God, Who cannot err, is the Author of the Bible. Yet fewer than half are willing to affirm that the Bible God wrote is "one hundred percent accurate in all it teaches."
Two-thirds admit everyone sins, yet also insist that most people are good by nature! Perhaps most oddly, half of Americans believe that only those who accept Jesus will be saved, yet sixty percent also say everyone will eventually make it to Heaven.
So what about professing Christians and especially evangelicals? Surely they did much better on basic doctrines of the faith. Uh, no.

Lifeway identified 586 of the three-thousand respondents as "evangelical." These are folks who believe the Bible is their highest authority, that personal evangelism is important, and that trusting in Jesus' death on the cross is the only way of salvation.
Yet huge percentages of these folks appeared to affirm major tenets of ancient heresies like Arianism. An astonishing seventy percent, for instance, say Jesus is a created being. Fifty-six percent say the Third Person of the Trinity, the Holy Spirit, "is a divine force but not a personal being."
Evangelicals, by definition, believe trusting in Jesus is the only way of salvation. Yet two-thirds of evangelicals--more than Americans as a whole--claim Heaven is a place where all people will ultimately be reunited with loved ones.
It's not just the departures from these historic doctrines that should concern us, but the contradictory answers. It shows not only that Americans in general and evangelicals in particular have the wrong answers on basic Christian doctrines, but that they don't really understand the concept of doctrine itself.
Howard Snyder, director of Manchester Wesley Research Center, attributes this widespread cluelessness to churches having basically abandoned theological education. Catechesis has fallen by the wayside.
Folks, if we hope to preserve not only evangelical faith in the generations to come, but also the "mere Christianity" expressed in the Nicene Creed, we have to take theological instruction seriously again.
Originally published at Breakpoint.org - reposted with permission.